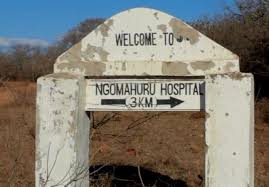 According to Masvingo’s Hevoi News patients from Masvingo’s Ngomahuru Psychiatric Hospital are taking their daily baths at a nearby stream due to persistent water shortages at the hospital.

ZINWA is reportedly supposed to supply the institution with water and they have said there was a power cut and they cannot pump water to the institution and they are blaming ZESA for not addressing the water problem.

Patients at Ngomahuru Psychiatric Hospital are bathing in a nearby river as hospital runs out of water for more than two weeks due to an electrical fault. Med Sup Dr Maramba says they get their supply from @zinwawater who are saying the fault needs @ZetdcOfficial to fix.

The City of Masvingo is having dire water shortages and even published a water rationing schedule for the ancient city’s residents to take note of. The government, ZESA, and ZINWA are yet to publicly comment on the report.