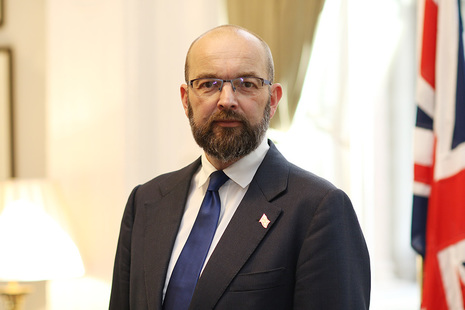 The UK Minister for Africa has released a statement on the just ended Ugandan elections. James Duddridge said the UK government welcomes the calm passing of the elections. He also said they were concerned about the internet blockade that was initiated by President Museveni’s government and urged the Uganda authorities to investigate issues circulating about Uganda’s political climate during the election season.

Said Duddridge in a statement:

The UK Government welcomes the relatively calm passing of the elections in Uganda and notes the re-election of H.E. Yoweri Museveni as President.

Many in Uganda and beyond have expressed concerns about the overall political climate in the run up to the elections as well as the electoral process. It is important these concerns are raised, investigated and resolved in a peaceful, legal and constitutional manner. We ask that all parties, including the security services, but also all of Uganda’s political movements, act with restraint to ensure the peaceful resolution of disputes.

We commend the role of the media, observers and civil society throughout the elections. The UK is concerned by the national internet shutdown, which clearly limited the transparency of the elections, and constrained the freedoms that Ugandans are entitled to.

The UK is a steadfast advocate for Ugandan democracy and we will continue to work to achieve inclusive democratic progress that delivers for future generations. As a longstanding partner, we urge Uganda to continue to strive to meet its own international human rights commitments, including respecting the right to freedom of opinion, freedom of expression and freedom of the media.

The European Union last week said they were impressed by the relatively peaceful and organized elections. Meanwhile, Uganda’s firebrand politician and opposition leader Bobi Wine is reportedly still under military surveillance since the day before yesterday according to his tweets.