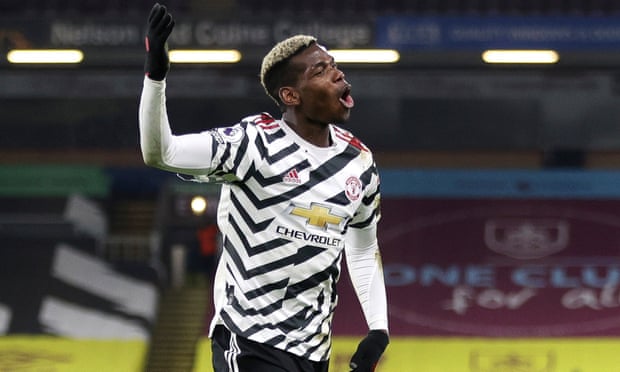 Paul Pogba wheels away after scoring via a deflection to give Manchester United the lead. Photograph: Clive Brunskill/Reuters

Manchester United are now top of the English Premier League table after a 1-0 victory over Burnley at Turf Moor on Tuesday night.

Paul Pogba’s 71st strike was enough to give Manchester United victory at Burnley and send them three points clear at the top of the Premier League.

United dominated a contest in which Burnley failed to register a single shot on target until stoppage time.

United are now on 36 points, with Liverpool in second on 33 points while Leicester and Everton are third and fourth respectively but both on 32 points.

This is the first time for the Red Devils to head the table after 17 rounds of matches since December 2012, in Sir Alex Ferguson’s final, title-winning campaign.

In the seven seasons since Ferguson retired, United have never been higher than second at this stage of the season.

Speaking to BBC after the match, Manchester United manager Ole Gunnar Solskjaer said he was pleased with the result. He said:

I’m very pleased of course. Any time you get three points you are happy. We had to dig in and earn it and we did.

I’ve not seen the fouls but it must be right – the referee went over to look at it. The disallowed goal – that’s a mistake, we have to be honest.

The goal was top, great execution and style. Paul Pogba really played well tonight. It would have been easier for us, we should have got the second goal but we don’t do it the easy way.

We feel very confident going into games. Away from home, we have really done well. We have to believe in ourselves and we do. We’ve done a great job, it’s good times.

It’s a test against the champions [Liverpool on Sunday] who have been fantastic, a great test for us.

Next up for Manchester United is a trip to Anfield for a top-of-the-table clash with Liverpool on Sunday, 17 January 2020 (6.30 PM CAT).