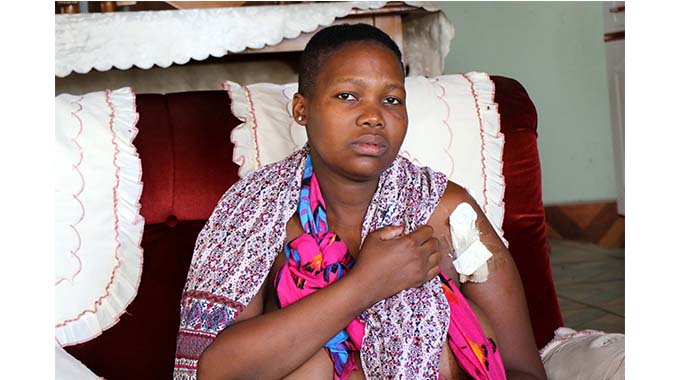 A pregnant Bulawayo woman was allegedly shot and injured by police during a high-speed chase in Lupane, Matabeleland North.

Sithembiso Moyo (28), a Pumula South resident, was shot in the arm on 28 December as three police cars chased a kombi along the Bulawayo-Victoria Falls highway.

Moyo, who is 5 months pregnant, and her two children had bordered the kombi police suspected to have been stolen.

The kombi ended up plunging into a river. The driver and a teenager who was travelling with him escaped.

Speaking to the Chronicle at the family home in Bulawayo’s Pumula South, Moyo said they were heading towards Lupane when the police vehicles chased the kombi and fired live ammunition from behind. She said:

As we were heading towards Lupane Centre I heard bullets hitting the vehicle. I then hurriedly tried to hide my two children under the seats so that they could be safe from the bullets. In the process that is when a bullet hit my left shoulder.

The driver and the teenager then jumped from the moving vehicle and fled before the kombi fell off a bridge and stopped. Police tried to track them down but failed.

Moyo was then ferried by an ambulance to Mpilo Central Hospital in Bulawayo where she was admitted.

She said she was discharged after some days as there were no specialists to assist her.

Moyo also revealed that the police officer who shot her, a Nkala, promised to foot medical expenses but he has since gone silent.

She is now appealing for assistance to get specialist treatment as she is experiencing excruciating pain.

One Comment on “Police Shoot, Injure Pregnant Woman In Lupane”