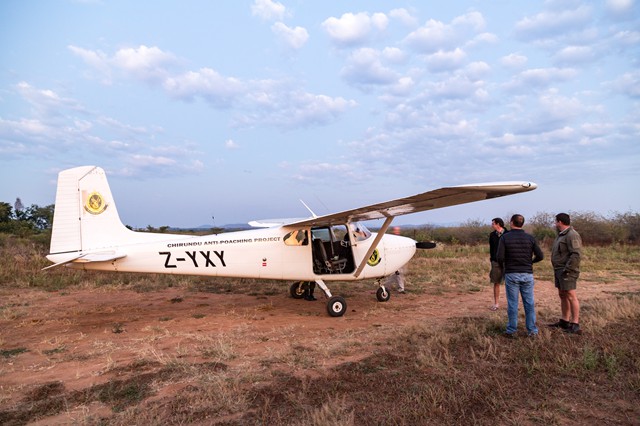 The exact Cessna 182 aircraft which crashed in the Zambezi Valley’s Chewore wilderness on 23/10/2020.

The search for the missing Zimbabwe National Parks and Wildlife Management Authority (Zimparks) ecologist Exeverino Chinoitezvi is still ongoing, two weeks after he left the wreckage of a plane crash in the Zambezi Valley.

Villijeon was reportedly found dead on the spot while Singh and Van Den Berg were critically injured and found trapped in the wreckage.

Chinoitezvi, who is ordinarily based in Sengwa in Midlands, left his shoes, probably to seek help or in the heat of the moment and is still missing. Zimparks spokesperson Tinashe Farawo said:

The search is still on and we hope to find our colleague soon. We are grateful to our partners for all the efforts they are putting. We are still hoping to reunite with our colleague.

Despite the Air Force of Zimbabwe (AFZ) joining the search, there are numerous challenges being encountered by the search party. The Herald quotes its source as having said:

Chinoitezvi left his shoes at the scene by the plane, maybe at the confusion of the moment and has not been found. Without shoes, his feet are too soft to leave a hard spoor.

Again, the ground foliage in the area is too difficult. There are croton and mopane trees that drop a lot of leaves and there is a carpet of dead leaves covering the ground for a vast swathe. This is what has made the search very difficult.

Then there is a lot of wildlife, predators of all kind from lions to leopards and hyenas.

Again, the high temperatures of up to 40 degrees Celsius, which are the norm this time of the year, take a lot of energy.

He might have tried to get water but most of the rivers in the area are dry this time of the year, except the Zambezi which is more than 20km from the crash site.