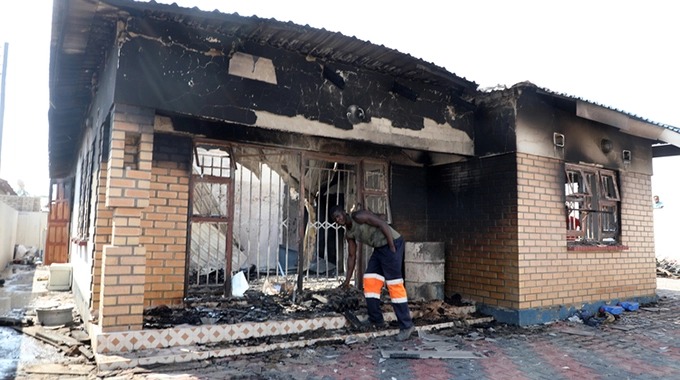 A residents looks at the burnt house and property worth thousands of dollars destroyed when a gas tank exploded in Zengeza 4 Chitungwiza on 30 October 2020. – Picture: Justin Mutenda

A Chitungwiza businessman lost more than US$50 000 cash and household property worth over US$30 000 when his house was gutted by fire around midday on Friday.

Despite the house being less than a kilometre from Chitungwiza Municipality’s head office, no help came from the council as a fire tender had to be sourced from Harare City Council.

When the fire tender arrived, all the property had been destroyed, with only a mattress and a few utensils being recovered.

The “Blue Roof” house, as it is widely referred to by locals, is located by the roadside in Zengeza 4 at an area popularly known as Pagomba.

House owner Petros Pamurai expressed scepticism over reports that a gas tank exploded in the kitchen, leading to the inferno. He said:

I had a lot of money. More than US$50 000 and l suspect that someone might have stolen the money and set ablaze the room to cover up their tracks. This is possible as there are a lot of people who frequent the house.

Pamurai said when the fire broke out, there were many people at the house, including his mum, wife and some relatives whom he wanted to drive to Chinhoyi.

He said he would temporarily relocate to his other house in Waterfalls.

There were no injuries or deaths from the fire.