ZRP has released the following statement in which they stated that they are looking for Bervern Dzinoenda who is well known for his pyramid scheme popularly known as Bervern Capital.  The statement that was released by ZRP yesterday stated that Bervern was wanted in connection with Ponzi Schemes and fraud.

Read the full ZRP statement below:

The Zimbabwe Republic Police is seeking information on the location of Bervern Dzinoenda NR 59-54186 C-48, Passport number CN532572, in connection with cases of fraud as defined In section 136 of the Criminal Law [Codification and Reform] Act, Chapter 9:23 and contravention of section 5(1) of the Banking Act, Chapter 24:20.

During the period between 2018 and 13th August 2020, the accused person operated Bervern Capital Private Limited, accepting deposits from members of the public, posing as a registered investment company without a licence from the Reserve Bank of Zimbabwe. Clients were promised super profits upon maturity of that deposits. The accused person has since disappeared with the cash without paying some depositors and his whereabouts are unknown to date. 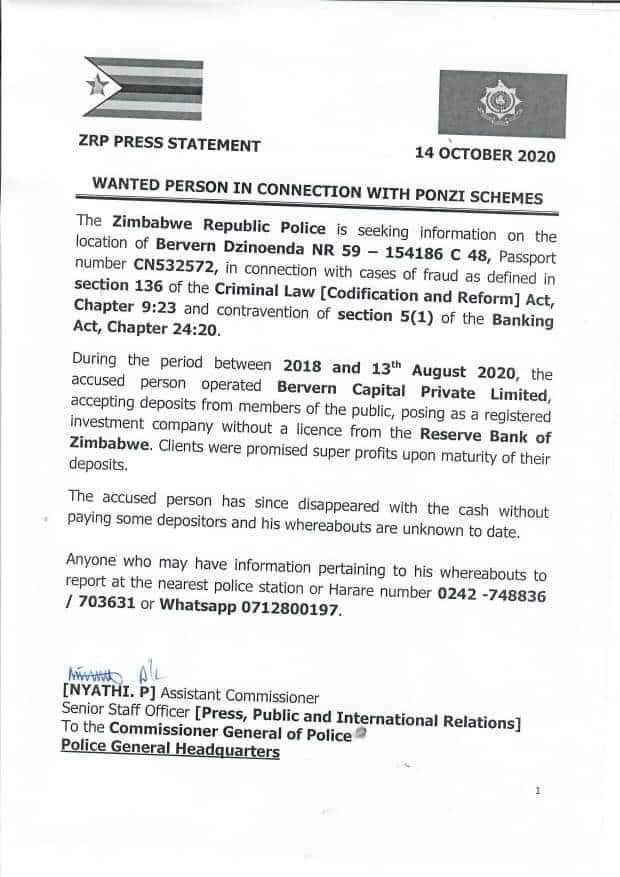