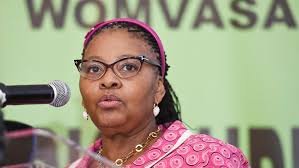 South Africa’s Defense Minister Nosiviwe Mapisa-Nqakula’s will not receive her salary for 3 months from November after it emerged that an ANC delegation for Zimbabwe used a South African National Defence Force (SANDF) jet to come and have “frank talks” with Zanu PF earlier this month, eNCA reports.

In reprimanding Defense Minister Mapisa-Nqakula, Ramaphosa reportedly found out that she did not act in the best interest of good governance:

Ramaphosa found that Nqakula didn’t act in the best interests of good governance.Mapisa-Nqakula will be docked three months’ pay from November. Her salary will be paid into the Solidarity Fund established to support the country’s response to the Coronavirus pandemic.

Ramaphosa has also asked the ANC to reimburse the state for the costs of the flight. Commenting on the issue, a political analyst, Sandile Swana said South Africa President Cyril Ramaphosa’s reaction to the situation is of a man playing it safe:

The statement by the President is very vague and is not grounded in law.

Swana also said it was not the first time the Defence Minister compromised national security key points. Meanwhile, the ANC delegation has said it will come back to speak to other stakeholders in Zimbabwe while the government has made it clear that the opposition will not be allowed to speak to the ANC delegation.

ANC Trip To Zim: Ramaphosa Docks Defence Minister’s Salary For 3 Months For Letting The ANC Use The Air Force Jet