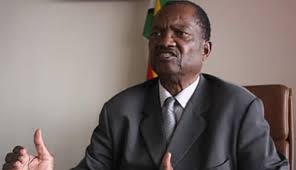 Rugare Gumbo former liberation stalwart and former war veterans leader while speaking to the Daily News said, for President Emmerson Mnangagwa to solve Zimbabwe’s problems he must unite all people, and be open to speaking to members of the opposition.

Speaking to the publication, Gumbo said:

The situation on the ground doesn’t seem to allow the continuation of the crises because people are now tired of all this. There must be a change in the attitude of those who are in power.
They must unite the people, as any failure to do that will mean that they will be digging their own political graves,He (Mnangagwa) must absolutely make sure that he unites Zimbabweans as he is the president. He has the power to sit down with all Zimbabweans.

Gumbo spoke at length about the need for oneness and even cited fellow liberation war hero Simon Muzenda and his quest for unity:

He must be able to contact his rivals and talk with them so that they can solve the current problems I was watching vaMuzenda’s (the late former Vice President Simon Muzenda’s) video, where he was encouraging unity among Zimbabweans.
Without unity, the future of Zimbabwe is bleak. It is going to be problematic for the ruling party to go into 2023 without uniting Zimbabweans. They are digging their own grave if they fail to talk to all political parties and unite all people to solve the country’s current crises,

Gumbo also condemned people who prioritise power only and said the ruling party must either shape up or ship out:

If you think of power only without thinking about the life of the ordinary person you have a problem. The ruling party must shape up or ship out. Mnangagwa must be man enough and accept the challenges facing the country. If there is no unity, there will always be external and internal threats. You don’t need that. You need … to unite even with people who oppose your views so that you can bring stability in the country.
The ruling party must know that one doesn’t know what lies in the future. Change does occur and for anybody to think that he will remain in power for ever is not good. In Shona they say chinobhururuka chinomhara. Hakuna chisingaperi (everything ends) and we say let’s not do that. Everyone is a Zimbabwean. There is no Zimbabwe for Zanu PF or MDC … Zimbabwe is for everybody.

Meanwhile, another Zanu PF stalwart and a member of the politburo Tshinga Dube over the weekend echoed Rugare Gumbo’s sentiments and said the leaders have to first accept that they need help for the ANC to intervene and mediate in Zimbabwe.
More: Daily News