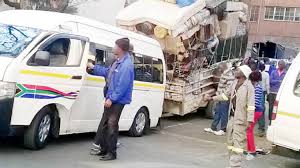 ZIMRA has reportedly announced that it is increasing enforcement of cargo checks at Beitbridge Border Post following reports of rampant abuse of import laws which is prejudicing the state of millions of dollars, Chronicle reports.

ZIMRA released a statement on Thursday about increased border checks and said the blitz was going to be extended to cross border couriers also known as Malaichas or Omalayitsha:

This facility has been available for commercial imports only. However, random spot-checks and physical inspections have shown that the quantities, price points of imported materials have been falsely declared thereby defeating the purpose of pre-payment and pre-clearance, which is intended to ensure smooth clearance and facilitation of movement of people and goods.

The tax watchdog said there was relative congestion mostly of rigid trucks at Beitbridge Border Post due to ongoing customs law enforcement measures. According to the statement, cross-border bus operators and commercial truckers were now abusing the private imports facility. The facility makes it mandatory for every Omalayitsha to make a declaration and pay duty before they cross the border. There is no rebate applicable as these goods are unaccompanied by their real owners.

However, the huge number of false declarations as shown by the amount of revenue recoveries from each truck has resulted in 100 percent physical checks. The selling prices of these goods in South Africa is well known and so false declarations are easy to detect. When a client pre-clears, it does not mean they may not be subject to compliance checks.

The legislation provides for post clearance checks and these are based on risk. It should be noted that Beitbridge used to clear about 80 buses per day before Covid-19. The former bus operators have now joined the Omalayitsha and have replaced the buses with rigid trucks

Our mandate still remains to collect revenues for the Government and ultimately the nation. In instances where corruption, smuggling and illegal activities are occurring, Zimra will use its authority as provided for in the laws of the land to ensure that the nation is not prejudiced through revenue leakage.

ZIMRA recently announced they had surpassed their revenue target for the first half of 2020 by close to $6 Billion.