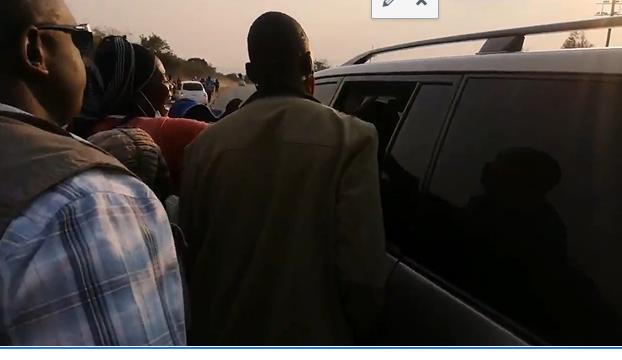 Ngarivhume told NewZimbabwe.com that following Chamisa’s visit, authorities ordered that they are put in leg-irons and immediately transferred to Chikurubi Maximum Security Prison, a notorious prison located on the eastern outskirts of Harare. Said Ngarivhume:

When Chamisa came to visit us, there was a backlash. It was hell, thunder and fury.

They started threatening and telling us they were going to take us to Chikurubi Maximum Prison as punishment.

So they literally grabbed and bundled us onto a big prison truck and told us ‘you are going to Chikurubi as punishment because we are no longer able to contain the huge volume of visitors, lawyers and everybody who was coming at Harare Remand Prison’.

It was psychological torture. Imagine being bundled into that truck in iron legs and shackles, you are never sure what’s gonna happen.

In another development, police in Murehwa on Monday rounded up 15 vendors suspected of having cheered on Chamisa when he passed through the area on Saturday.

Chamisa’s convoy was mobbed by scores of residents including children who were chanting ‘President! President!’ as he returned from the burial of activist Patson Dzamara in Mutoko.

The MDC leader stepped out of the vehicle and took time to talk to some of his supporters.

According to MDC Alliance spokesperson Fadzayi Mahere, the vendors, mostly women, were detained for several hours and fined, some as much as ZWL$500.00.