South African President Cyril Ramaphosa has told members of the African National Congress (ANC) that the party was not a path to wealth. He made the remarks amid reports that some party officials were engaging in underhand dealings putting the party and government to disrepute. Below is his letter to the party.

LET THIS BE A TURNING POINT IN OUR FIGHT AGAINST CORRUPTION
I write this letter to you, my fellow ANC member, as our movement and our country face one of the greatest challenges since the advent of democracy.

I am sure that you are aware that across the nation there is a sense of anger and disillusionment at reports of corruption in our response to the coronavirus pandemic. This anger is understandable and justified. In recent weeks, we have heard stories of tenders for personal protective equipment that have been given to individuals associated with ANC leaders and of public servants flouting the law in issuing tenders.

What has caused the greatest outrage is that there are private sector companies and individuals (including civil servants) who have exploited a grave medical, social and economic crisis to wrongfully enrich themselves. This is an unforgivable betrayal for the millions of South Africans who are being negatively affected by the impact of COVID-19, experiencing hunger daily, hopelessness and joblessness.

The Conference further said that these practices contradict and damage our mission to serve the people and use the country’s resources to achieve development and transformation. Corruption robs our people of billions that could be used for their benefit.

Conference further said that the lack of integrity perceived by the public has seriously damaged the ANC’s image, the people’s trust in the ANC, our ability to occupy the moral high ground and our position as leader of society.
It was with this in mind that conference accordingly declared: “The ANC commits to the people of South Africa that we shall isolate and root out corrupt tendencies in the public and private sectors.”

Since the 54th National Conference, we have taken decisive measures in government to disrupt and dismantle the state capture networks and decisively deal with the scourge of corruption.

As mandated by Conference, we have worked to restore the integrity and independence of law enforcement agencies and provide them with the means to effectively fight crime and corruption. As part of this, we have brought in new leadership at the National Prosecuting Authority, South African Revenue Service, Public Investment Corporation, the Hawks and State Security Agency. We have also replaced board and executive leadership at strategic state-owned companies.

We established an investigating directorate in the NPA to investigate and prosecute high-level corruption. We have also set up the SIU Special Tribunal to speed up civil claims against wrongdoers.
Some state-owned companies, like Eskom and Transnet, have successfully recovered stolen funds and continue to pursue others that have allegedly siphoned off money from these companies.

We have used competition policy to tackle excessive pricing and abuse of market dominance in the private sector, particularly during the state of disaster where several firms have been found guilty of illegally inflating prices of things like face masks and sanitiscrs.

Despite all this work, corruption stands as one of the greatest challenges facing our society. The progress that our nation has made in improving the lives of our people in the last quarter century is being eroded by corruption and patronage.

The ANC is the movement that was so central to mobilising our people for the achievement of our freedom. It has also led the government that has brought peace, development and transformation to our society. It is a matter of great concern to us that corruption has so deeply infected the state, the business community and society to a point of threatening to undo the gains we have made in the last 26 years.

While the current allegations about corruption in the fight against the coronavirus pandemic have brought this issue sharply to the fore, the reality is that corruption in this country has far deeper roots.
Apartheid was both morally and materially corrupt. Even as its laws enabled the theft of resources that rightly belonged to the people of South Africa, there were many in the administration, in state companies, in bantustans and in business who flouted even those corrupt laws to enrich themselves.

As a movement representing the aspirations of the South African people, having fought a just struggle against a brutal regime, it was our intention and our hope that the overthrow of apartheid would herald a new era of integrity, honesty and ethical conduct by all in positions of responsibility.
We sought not merely to change the political system, but to build a new nation on a fundamentally different moral foundation. It was to be a society based on equal rights for all, on solidarity, integrity and accountability.

We need to take responsibility

As the inheritors of the legacy of Luthuli, Tambo and Mandela, we must be honest with our people and ourselves. We must acknowledge that our movement, the African National Congress, has been and remains deeply implicated in South Africa’s corruption problem. We have to be sensitive to the concerns that are being raised by our people about our role as a movement in corrupt activities.

This painful truth was recognised by delegates to the 54th National Conference. In a frank and direct diagnostic report tabled at the Conference, then Secretary General Gwede Mantashe said: “When our people protest against the unethical behaviour of our leadership, they do so not out of hatred but from feeling betrayed as they expect better and higher standards from revolutionaries.”

The 54th National Conference was a seminal moment in the history of our movement. In much the same way as it had done at the historic Morogoro Conference nearly 50 years earlier, the leadership and membership of the ANC had to confront its severe weaknesses and embark on a programme of renewal.

When we went to the general election last year, we admitted the mistakes we had made, we acknowledged how corruption and state capture had damaged our country, and we made a solemn pledge to our people to correct our ways. Despite the clear progress we have made since the election, we still have to give full effect to the promise we made.

Today, the ANC and its leaders stand accused of corruption. The ANC may not stand alone in the dock, but it does stand as Accused No. 1. This is the stark reality that we must now confront.

At its last meeting, at the beginning of this month, the ANC National Executive Committee (NEC) recognised the justifiable public outrage cause by recent reports of corruption. It said these developments “cause us collectively to dip our heads in shame and to humble ourselves before the people”. The NEC recognised that it had a clear mandate from the 54th National Conference to deal decisively with corruption and to restore the integrity and values of the ANC. It said this is a responsibility it cannot defer, outsource or avoid.

Now is the time, the NEC has resolved, to make a break with the past and to act. How did we get here? For more than 26 years, the ANC has been in government at a national level and in most provinces and municipalities. This has meant that leadership positions in the ANC have been seen by some as the most direct route to, in the first instance, employment and, in the second instance, to influence in the award of tenders and the distribution of other government resources.

The people see how organisational principles and processes are corrupted for personal gain. They see how this deviant behaviour goes unchecked and allows unscrupulous and sometimes criminal elements to flourish. We cannot then blame the people if they stay away from our branches, programmes and initiatives.

Our lack of discipline and failure to deal with the issues in our movement have eroded our organisational ethos and standing.

Over many years, we have seen corruption in the state, in society and in the ANC take several forms.
Perhaps the best-known form of corruption is the award of tenders and other contracts to certain companies based on conflictual relations such as friendships or family connections. For these people, success depends on who you know in the public service. Sometimes those awarding the tenders receive kickbacks from the successful companies.

Then there are ‘jobs for pals’, where politicians and officials disregard hiring procedures to employ family members, friends or associates. Not only is this grossly unfair to other prospective candidates, but it often means that the people employed are simply not up to the task. Public services arc not rendered, public institutions are poorly managed and public funds go to waste.

As we have seen during the COVID response, there are local ANC leaders who have used food parcels meant for the poor to buy political favours from those people in the branch or broader community who they rely on for their positions. These practices quite literally take food out of the mouths of the poor.
On a hugely different scale, but with the same effect, is the capture of state institutions by public interests facilitated by politicians and officials at the highest level.

This ‘state capture’ is being laid bare through evidence being heard by the Zondo Commission of Inquiry. It reveals a disturbing level of grand corruption, where individuals were placed in various institutions to manipulate procurement and other processes to siphon off massive amounts of funds for a network of politicians, public servants and business people.

The effect has been devastating. Billions of rands that should have gone to improved public transport, to better infrastructure for the poor, to reliable and affordable electricity, to emerging black farmers and to the broader development of our country have been stolen to line the pockets of a criminal few.

Not only has money been stolen, but many of these institutions have been left deeply dysfunctional and some virtually destroyed. It has caused huge damage to the economy and to the capacity of the state.
We must have the political courage and the honesty to acknowledge that ANC leaders, public representatives and members have on numerous occasions been implicated in such forms of corruption. 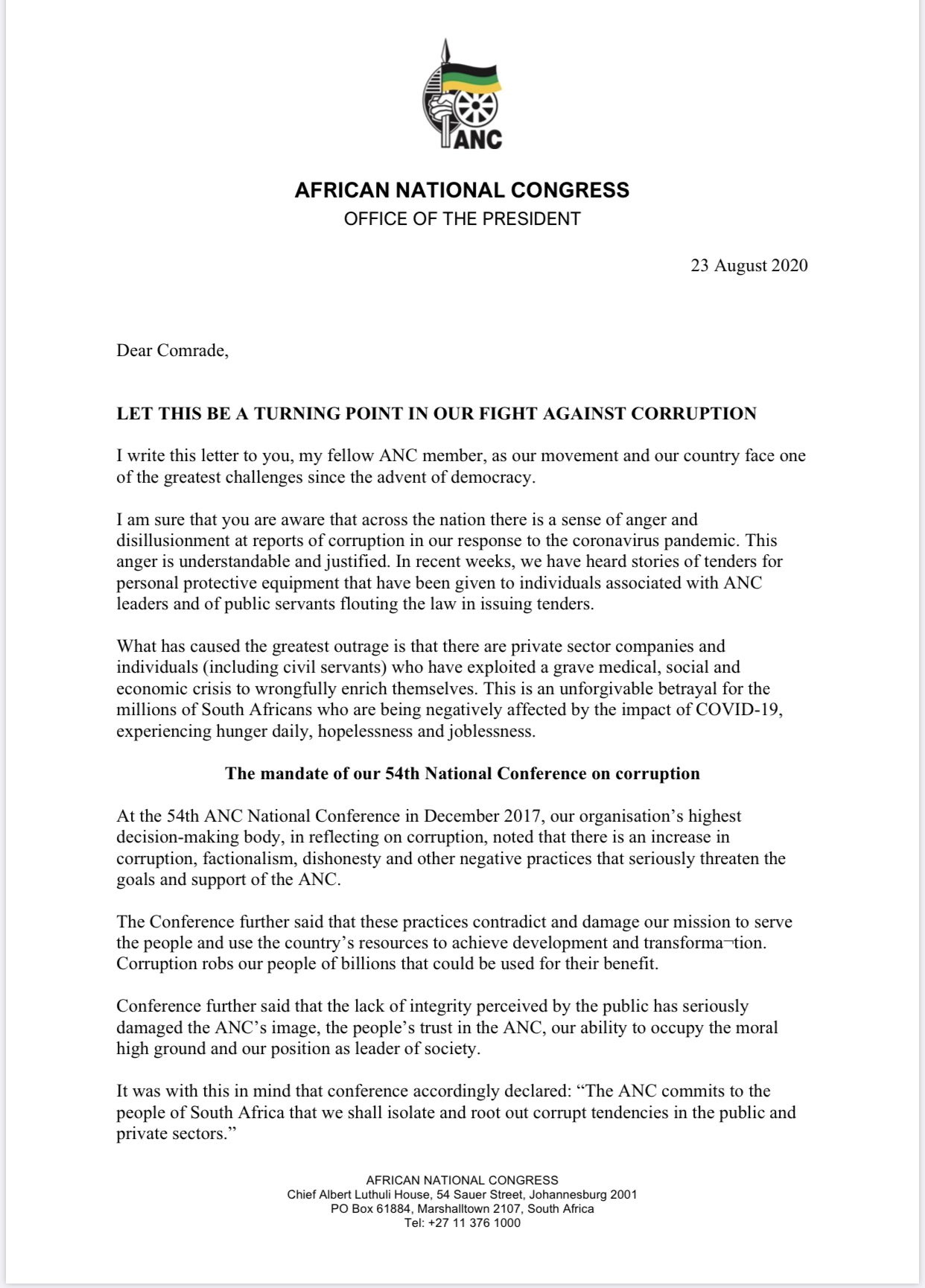 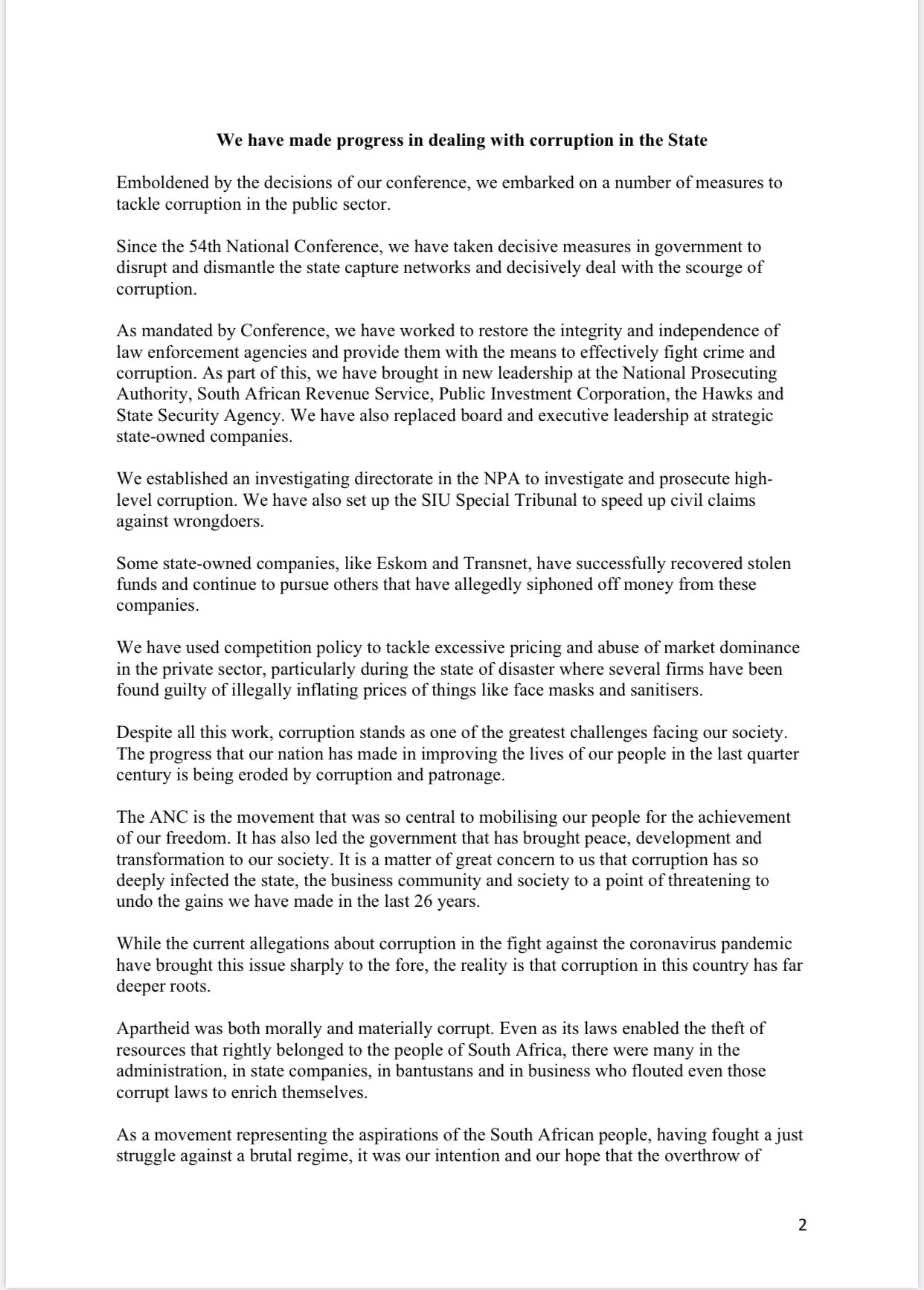 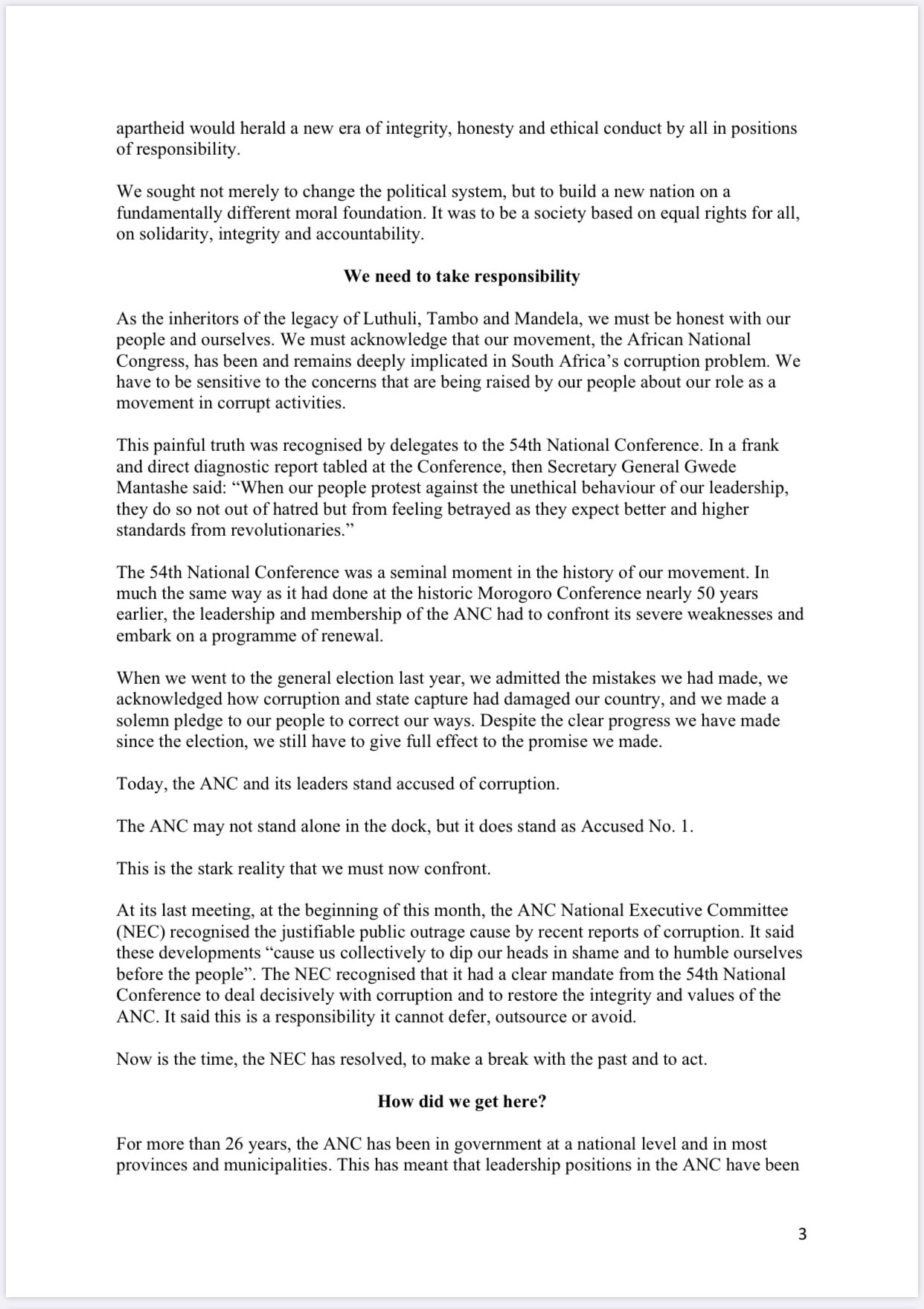 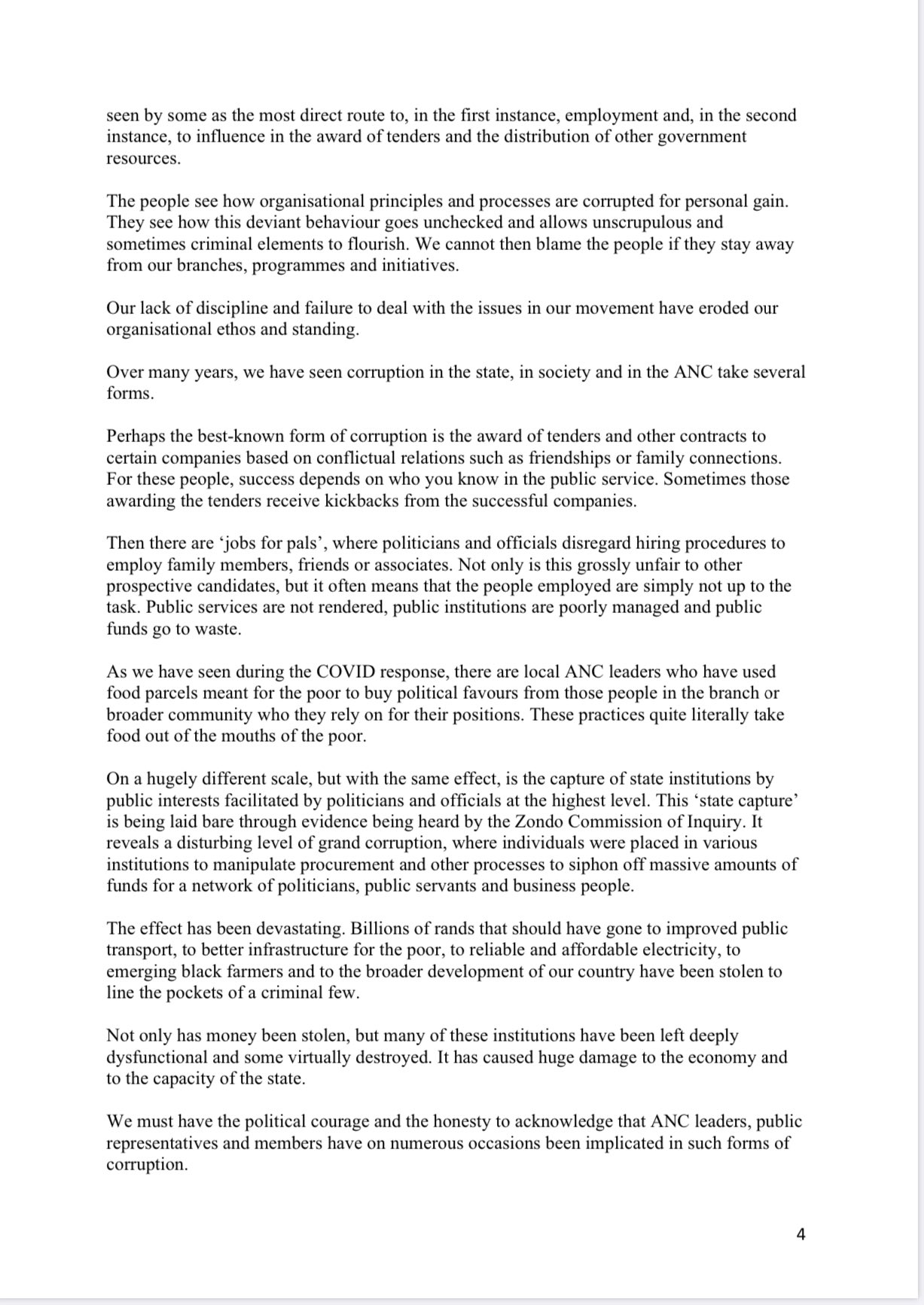 One Comment on ““ANC Is Not A Path To Wealth,” President Cyril Ramaphosa Tells Corrupt Officials ”

“ANC Is Not A Path To Wealth,” President Cyril Ramaphosa Tells Corrupt Officials