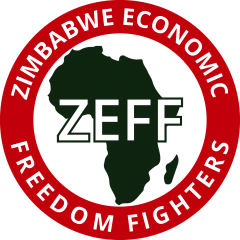 Economic Freedom Fighters Zimbabwe has announced that they will be demonstrating at Beitbridge Border Post to send a clear message to the Zimbabwean government that human rights abuses that have made international headlines worldwide must stop and the government must find a permanent solution to the dire economic situation in the country.

The statement that announced the party’s decision to demonstrate and blockade the border post also list the party’s demands to the government. Read the full statement below.

EFF ZIMBABWE’S POSITION TO THE CONTINUING CRISIS IN THE COUNTRY
On the 10th of August 2020, the EFF Zimbabwe Central Command Team met and passed a resolution
to organize and hold a peaceful demonstration at the Beit Bridge Border Post. The resultant aim is to
blockade the Beit Bridge Border Post and send a clear message to the inhumane and brutal regime in
Zimbabwe that we cannot continue to watch and do nothing whilst our people are brutalized,
starved- women sexually assaulted, political activists arrested and tortured for no reason other than
exercising their constitutional right of freedom of expression.

The wealth and the welfare of our people has been brazenly stolen by thieves in suits masquerading
as legitimate representatives of the people yet they are a gang of thieves in a captured Zanu Pf party
and government. Consequently the ordinary citizens of our great country, the poor, the old and the
sick, the children and young people, parents and basically the majority of our people now live in
perpetual and humiliating poverty caused upon them by their own government.

We have listened to the distressing cries of our mothers and sisters who have been raped, our
fathers and brothers who have been tortured, our grandparents who experience daily humiliation of
failing to meet their private personal daily needs. We have resolved that our generation must act
now to save Zimbabwe and her people. Our forefathers and our ancestors will punish us harshly if
we do not carry out this generational mandate of freeing our people from this evil tyranny.

We call upon the youths to save their country because the future of Zimbabwe lies in their hands.
We call upon those in the security services particularly the army and the police to pose and think
about that mother or sister nursing the brutal injuries after being raped and beaten, we ask them to
think about that child who is hungry, sick and scared because those in government do not care about
their health and welfare.

One Comment on “FULL TEXT: Our Aim Is To Blockade The Border Post & Send A Clear Message To The Govt – EFF Zimbabwe Announces Decision To Demonstrate At Beitbridge Border Post”