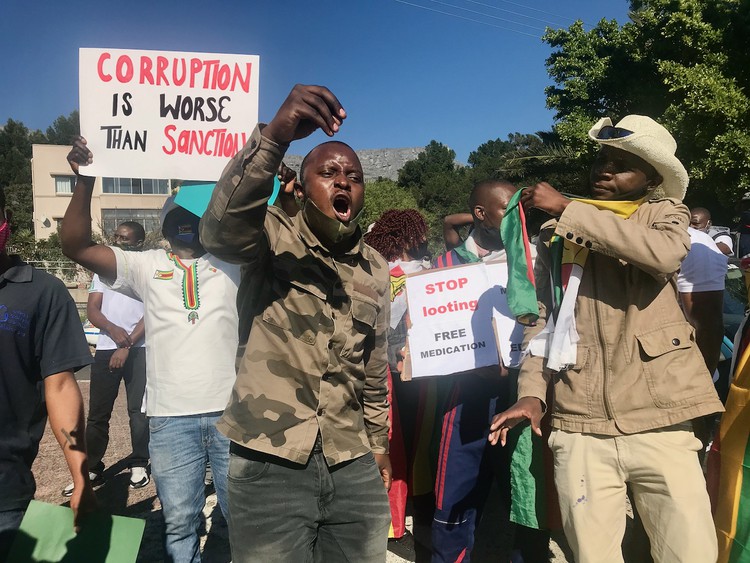 South African police on Friday dispersed about 150 people who were protesting outside the Zimbabwean Consulate in Cape Town.

The demonstrators initially refused to disperse and only gave in to the order after police reportedly threatened to bring tear gas and rubber bullets.

Political activists and pressure groups had called for protests on July 31 to voice their anger against egregious corruption by the country’s ruling elites as well as economic mismanagement.

The country’s main opposition party, the MDC Alliance, also voiced its support for the protests.

MDC Alliance Western Cape information secretary Don Madziva, who has been living in South Africa since 2007, told GroundUp that he is a political refugee and will not return to Zimbabwe as he fears for his life if he goes back. William Mapfumo said:

They [ZANU-PF] have ruined the economy, education, health system – nothing is functional. They have destroyed the future and dreams for the young generation. We don’t have anything to look forward to.”

Zimbabwe is just across the Limpopo river. There shouldn’t be much difference with South Africa, but the moment you cross the border you notice a huge gap. The situation is pathetic and depressing.

On the South African side of the border, there is food in shops and roads are well maintained. By the Zimbabwean side, shops are empty; there is a shortage of cash and fuel.

Police spokesperson Colonel Andrè Traut told the publication that SAPS members were deployed in the area to monitor the peaceful protest and the small crowd dispersed without any incident.

In Zimbabwe, the government fully deployed the military and police across major cities and towns, with citizens choosing to stay indoors.

One Comment on “Protestors Converge At Zimbabwean Consulate In Cape Town”