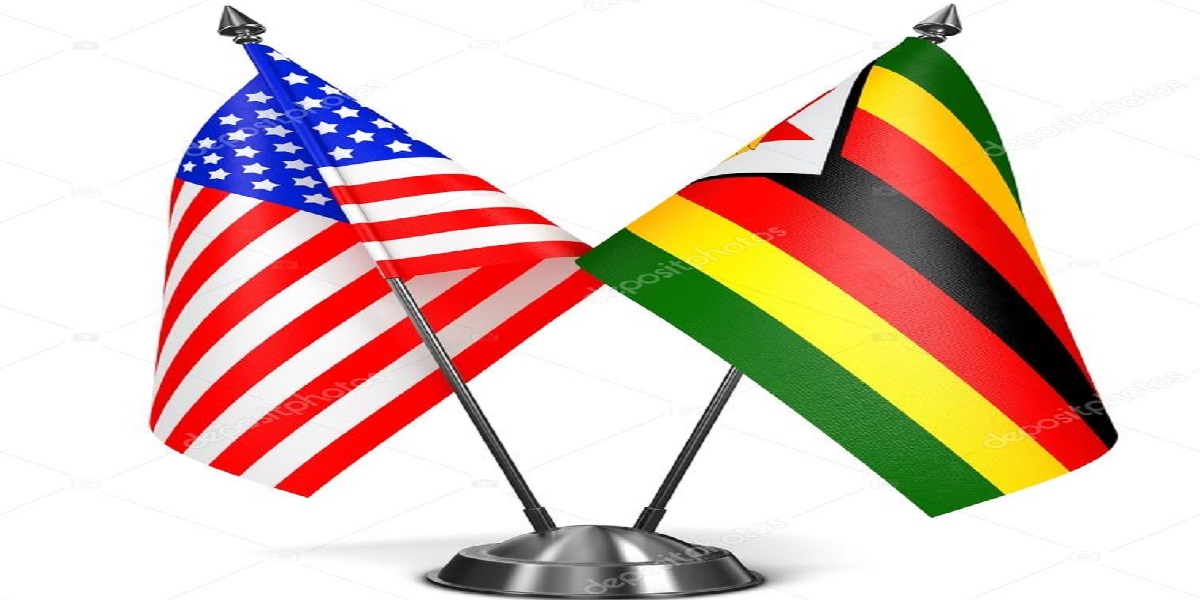 A letter that was written in February by the leader of the opposition MDC-T, Thokozani Khupe to the United States Senate in response to the Senate’s letter on U.S. relations with Zimbabwe has been circulated on social media.

In the letter, Khupe who was the chairperson of POLAD claimed that Zimbabwe was reforming following the departure of the late former president Robert Mugabe hence the need for the U.S. to mend relations with the Southern Africa country.

We present the letter in full below.

Regarding the recent news of your letter to Secretary of Treasury Steven Mnuchin, we felt compelled to reach out to you in hopes of furthering a relationship between Zimbabwe and the West and hope to be able to meet with you on our upcoming Trip to Washington DC in March 2020. Our organisation, Political Actors Dialogue (POLAD), is a platform for political parties that fielded Presidential Candidates in Zimbabwe’s 2018 harmonised elections to contribute to social, economic and political progress as well as re-engagement efforts. Our organisation was launched in May 2019. We are a bipartisan organisation and all-inclusive of all progressive political parties. In recent political meetings, 17 political parties have been represented. We regret that two political parties have chosen not to join our group and have repeatedly requested to engage the governing and ruling party (ZANU PP) in their own capacities outside the POLAD framework.

We agree with your observation that one of the challenges that has perennially hindered Zimbabwe from moving forward is endemic corruption. POLAD along with President Emmerson Mnangagwa, have also acknowledged the need to fight corruption at every level and has shown a renewed effort to do so by empowering the Zimbabwe Anti-corruption Commission (ZACC) headed by the honourable Justice Loice Matanda-Moyo. As an organisation, we have been supportive of the President in this effort.

ZACC is a constitutionally independent body established in terms of Section 254 of the Constitution of Zimbabwe and is made up of a bipartisan Board that is committed to prosecute corruption, reclaiming property, and holding corrupt people individuals accountable to their actions regardless, of party affiliation, political tics, or background. In order to buttress the will to combat graft, ZACC was clothed with arresting powers which they have used. We have no indication that there is any interference with ZACC as it carries out its duties and prosecutions from the Executive.

Where we strongly disagree with you, is in your statement that Sanctions don’t affect the average citizen. We represent multiple political parties and speak as a voice for the Zimbabwean people that are suffering. The 17 political parties and leaders in POLAD represent the majority of Zimbabweans electorally. Zimbabwe’s population is approximately 14.6 million and about 4.8 million people voted in the 2018 harmonised election, leaving about 9.8 million people who did not vote. As these 17 political parties, we are not only representing those who voted but we are representing the entire population of Zimbabwe.

Zimbabwe as a whole continues to struggle daily with access to capital not only because we have faced issues of corruption, but also because of Sanctions related issues. We hear directly from international corporations that are afraid to do business in Zimbabwe because of issues regarding Sanctions. We do not wish to blame every woe that Zimbabwe faces on Sanctions, but we cannot deny the fact that because of Sanctions, the very least among us in society suffer directly.

We represent a bipartisan spectrum in Zimbabwe society, and we are easer to move closer in partnership with the West. Recently, we have met with the U.S. Ambassador Brian A. Nichols and shared our mission with him and we are grateful for his interest and support. We have decided to further our mission by sending a delegation to Washington DC, March 25th-27th, 2020. We are requesting a meeting with you so that we as Zimbabweans can share our stories and the progress that has been achieved.

It is our hope that we find a way to work together towards re-engagement with the West. We must not forget it is a new day in Zimbabwe., While we are not yet where we want to be as a country, we are taking the appropriate steps in the right direction. We are no longer living in the era of the late Robert Mugabe’s administration and have tamed our heads to look at the future. We are committed to this future but we need your help.

We look forward to your response. Best wishes, 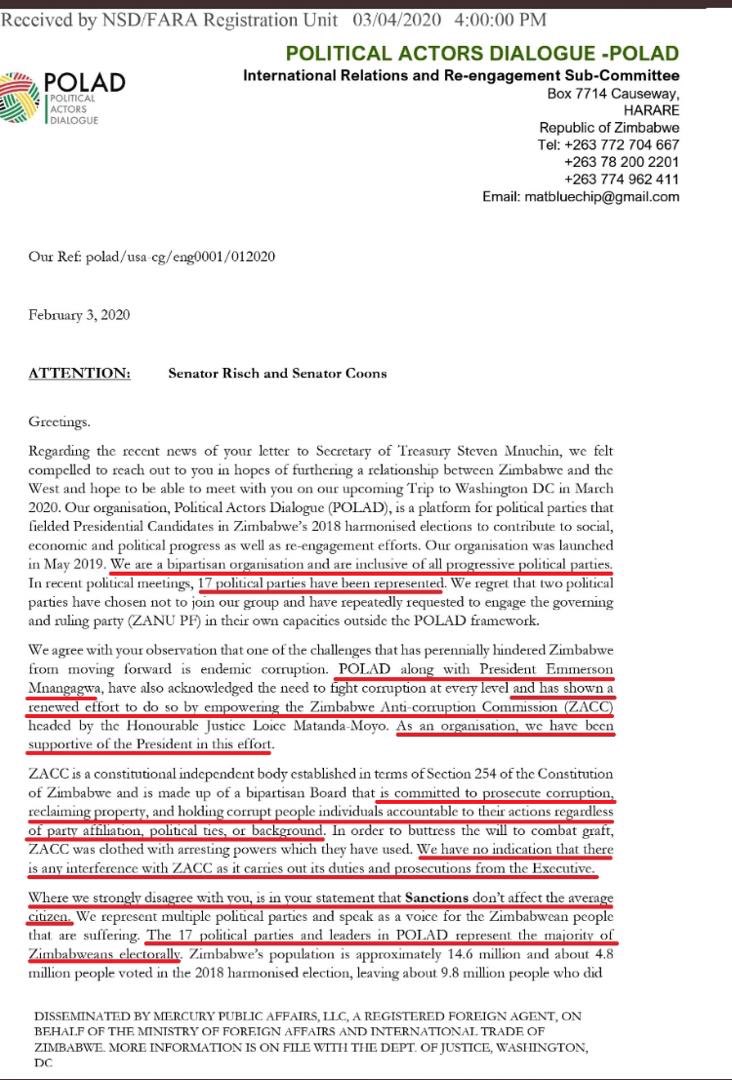 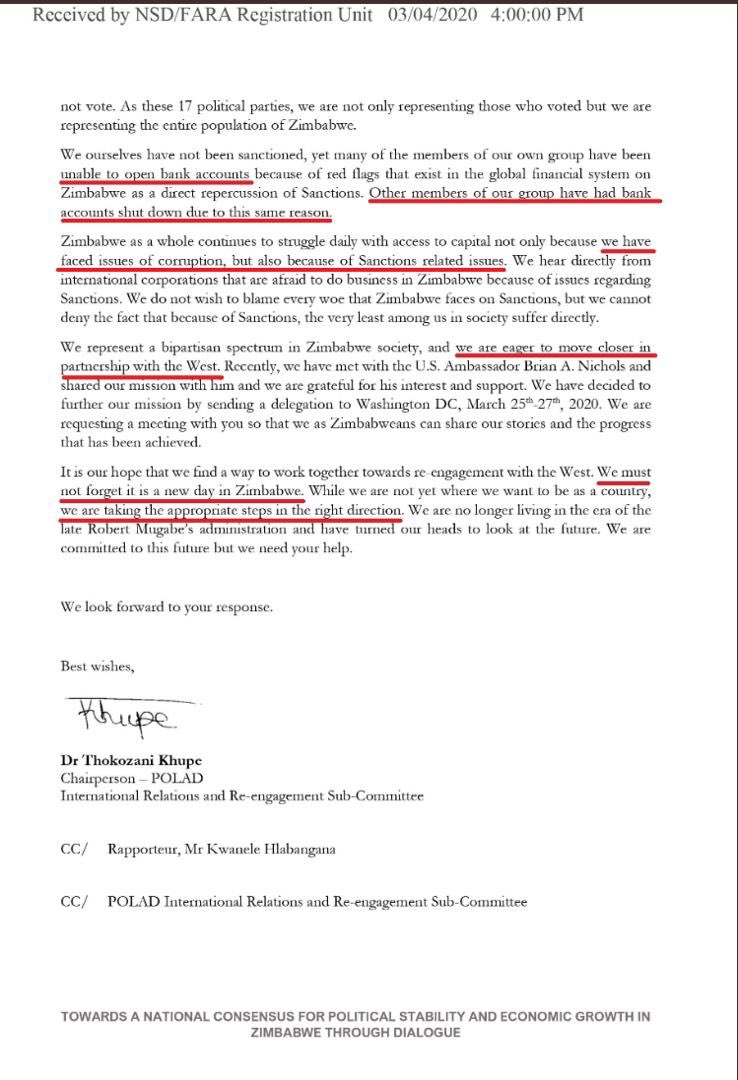