ZRP has denied that it sanctioned a demo on 31 July to be held at the US Embassy. ZRP said the letter circulating to that effect is fake and the signature on that document does not belong to the officer commanding Harare. In a series of tweets, ZRP said:

The ZRP dismisses a letter which has been posted on the social media platform indicating that Chief Superintendent Matongo, the Officer Commanding Harare Suburban District has sanctioned a purported demonstration by Zimbabwe Anti-Sanction Allied Movement set for 31 July 2020 in Harare CBD and Westgate. This is a forged letter with a fake signature which does not belong to the senior officer.

Chief Superintendent does not command Harare Central District and as such cannot sanction demonstrations or activities in Harare CBD. The date stamp on the letter does not belong to Chief Superintended Matongo’s office. In this regard the ZRP dismisses the fake letter with the contempt which it deserves. In fact no notification has been made to the relevant regulatory authority by Zimbabwe Anti -Sanctions Allied Movement.

The letter in question shows ZRP has sanctioned a demo planned by Zimbabwe Anti Sanctions movement to be held on 31 July at the US Embassy. 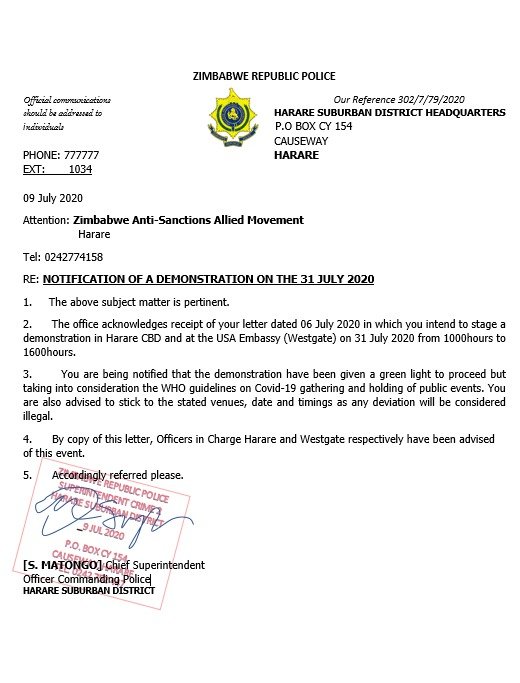