The opposition MDC Alliance has dismissed as false reports that the party leadership, including Nelson Chamisa, abused funds.

I have noted with concern the allegations by Mr Mashakada reported in The Herald of the 16th of June, 2020 alleging that senior leaders of the MDC Alliance have been involved in the misuse of party funds. This is a baseless accusation that serves a ZANU PF agenda.

As the public will know, this is not the first time allegations of this nature have been raised. I repeat what I have stated before, namely, that since taking office, I have implemented systems designed to combat fraud and any misuse of party funds. I am not aware of any misuse of party funds since I became Treasurer-General in 2019. I also stress that President Nelson Chamisa is not a signatory to any of the party accounts and he has always insisted on the highest levels of integrity and probity in all matters financial and administrative.

The allegations made by Mr Mashakada are accordingly scurrilous and baseless. It is also pertinent to note that at no time has Mr Mashakada raised any of these concerns with me in the last year as would have been expected, despite having every opportunity to do so. One questions why he now suddenly raises these matters which appear to indicate a malicious political motive. Zanu PF has made similar baseless accusations and they are hardly paragons of virtue. What is this common agenda, I ask?

I assure our members and the public that transparency and openness are at the heal t of all of our financial affairs. 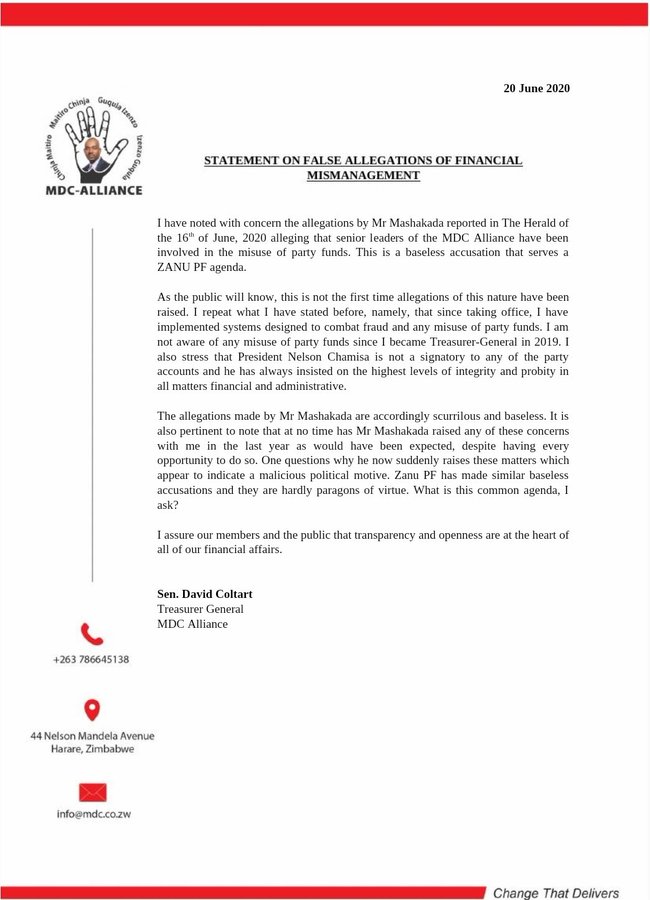