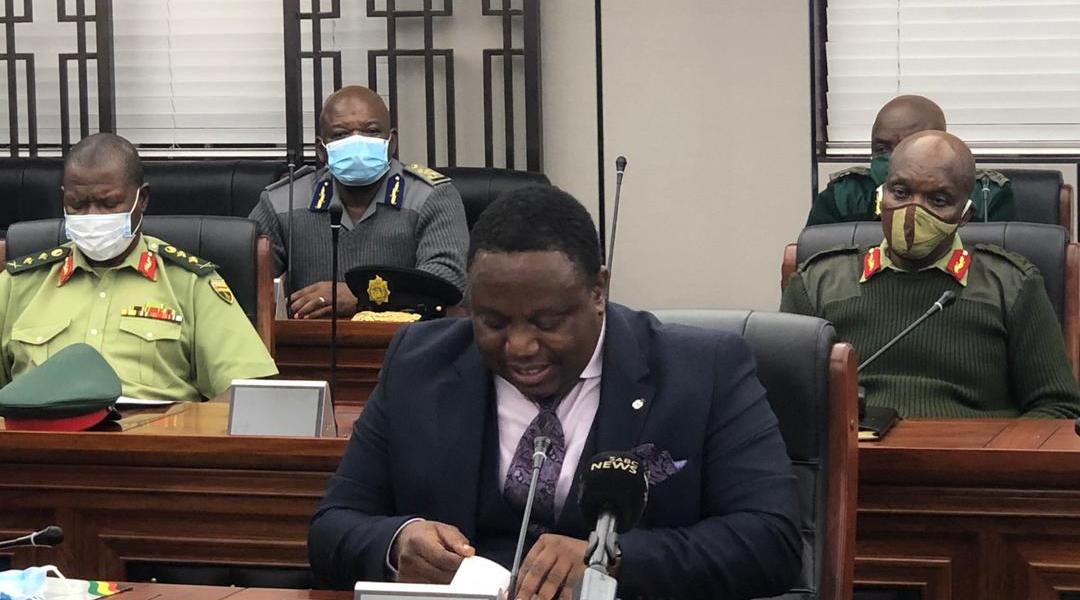 The government of Zimbabwe has dismissed rumours of an imminent military coup d’etat in the country saying the reports were fabricated by a “united front” of groups who want to make the country ungovernable.

Addressing the media on Wednesday evening in the capital Harare, Minister of Home Affairs Kazembe Kazembe, who was flanked by members of the Joint Operations Command (JOC), blamed the reports on an alleged coalition of some opposition parties, elements within the security services and exiled former government ministers. Said Kazembe:

The Government of the Republic of Zimbabwe has noted, with grave concern, a recent upsurge in rumours suggesting an imminent military coup d’etat in the country.

Government would, therefore, like, through the agency of the Working Committee of the National Security Council (WCNSC) as convened here in terms of Section 209 of the Constitution of Zimbabwe Amendment (No.20) Act 2013, to unequivocally debunk and dismiss these rumours with the contempt they deserve.

The purveyors of this false coup narrative claim that former members of the Zimbabwe African National Union-Patriotic Front (ZANU PF) who fell by the wayside and largely went into self-imposed exile at the advent of the New Dispensation in November 2017, are coming together in a united front with some named senior Government leaders, some members of the Security Forces of Zimbabwe and elements of the opposition formations.

This is in a bid to taint the image of His Excellency the President, to undermine the legitimacy of Government and to render the country ungovernable.

In his six-page statement, Kazembe also lashed out at foreign diplomats who he accused of engaging in anti Government activism which renders it difficult to differentiate them from card-carrying members of the opposition.

He also castigated Harare First Street preachers, Talent Chiwenga of Christ Revelation Ministries and Simon Shiloh of the Deeds of Christ Ministries accusing them of involvement in subversive activities.

Kazembe added that the next harmonised election is the only available opportunity for a democratic and constitutional change in Zimbabwe.