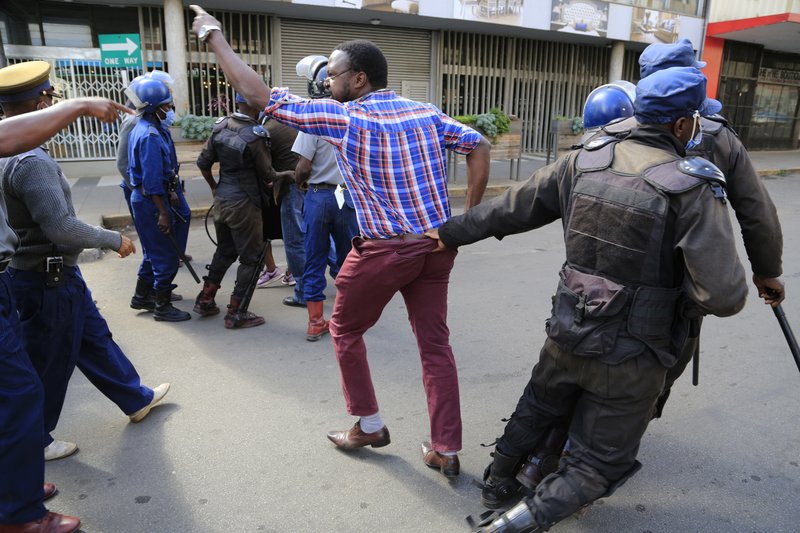 On Friday, six members of the opposition Movement for Democratic Change (MDC) Alliance led by Nelson Chamisa were arrested and charged with criminal nuisance.

The accused, Tendai Biti, Lynnette Karenyi-Kore, Gladys Hlatshwayo, Lovemore Chinoputsa, Vongai Tome and David Antony Chimhini were arrested at their party’s headquarters, Harvest House, when they tried to get access into the building.

The premises had been taken over the previous night by the MDC-Tsvangirai led by Thokozani Khupe with assistance from the army and police.

Below are the charges levelled against them.

I David Antony Chimhini aged 70 years N.R. 50-040349-H50 residing at House Number 254 Calee Drive, Prospect, Waterfalls, Harare do admit having been informed by Detective Inspector Chirape of CID Law and Ord, Harare that inquiries are being made in connection with a case of Criminal Nuisance as defined in section 46 as read with paragraph 2(v) of the Criminal Law (Codification and Reform) Act Chapter 9:23 ” where it is alleged that on 5 June 2020 at around 1320 hours at Harvest House, situated along Nelson Mandela Avenue, Harare, I whilst in the company of Lovemore Chinoputsa, Lynette Karenyi, Vongai Tome, Tendai Biti and Gladys Hiatywayo, employed any means whatsoever which was likely materially to interfere with the ordinary comfort, convenience, peace or quiet of the public or any section of the public, or did any act which was likely to create a nuisance or obstruction,’ moving into the road, Nelson Mandela Opposite, Harvest House, blocking it and singing the song “Kana ndafa nehondo”, thereby contravening the said act.

While I have been informed that I am not obliged to say anything in answer to these allegations, my failure at this stage to mention to them any facts relevant to my defence may result in a court drawing inferences against me.

You are also advised that you are entitled to the following rights:-

• To appear before a court within 48 hours unless further detention has been authorized by a competent court.

• Not to be forced to make a confession.

. The reason for detention.

. To approach the High Court for an order of Habeas Corpus i.e an order requiring you to be released, or to be brought before the court for the lawfulness of the detention to be justified.

. To be considered innocent until proven guilty.

. To be informed promptly of the charge in sufficient detail to enable them to answer it.

. To have time and facilities to prepare a defence.
Question: Have you understood the caution? Yes