There has been outrage after pictures of two victims of police brutality circulated on social media this week prompting Zimbabwe Republic Police (ZRP) to investigate the matter.

The victims, two women from Cowdray Park suburb in Bulawayo, claim that they were savagely beaten by police officers for “breaching coronavirus lockdown rules.”

The two sisters, Nokhuthula and Ntombizodwa Mpofu claim that they were leaving Pick n Pay supermarket in the suburb on April 16 when a police officer attacked them with a truncheon.

The victims narrating their ordeal.

Nokhuthula told journalist Zenzele Ndebele in an interview that she immediately returned to the police position upon realising that her phone which was in her pocket had been damaged during the assault, intending to complain to the officer’s colleagues.

The ‘arrogant’ offending officer sent her away but six officers followed the victims whom they handcuffed and assaulted on the way to a police post in the suburb where the duo was detained overnight on;y to be released in the morning after paying admission of guilt fines.

Pictures of their injuries from the assault circulated on Twitter and a campaign was launched to identify the arresting officer.

The six implicated officers have now been summoned to appear in court on Saturday charged with assault. 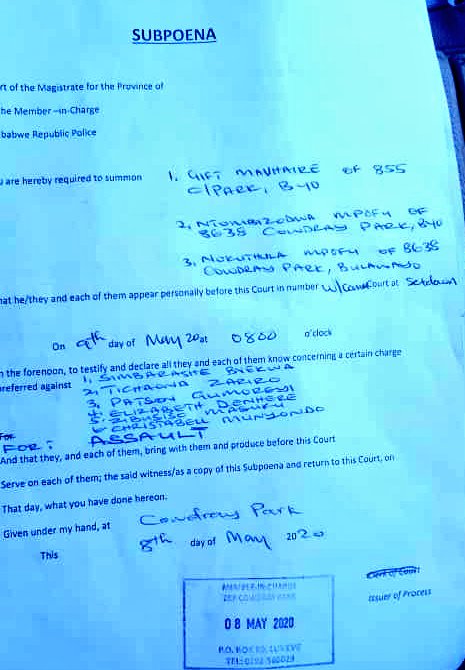