The Opposition MDC has issued a statement stating its position with regards to the expulsion of its members from Parliament.

Preamble
Noting with regret and sadness, the sharp rise in contradictions within the State, the lack of political cohesion, the serious closure of political space particularly the overt use of the Covid -19 pandemic to suppress and repress the citizens, the continued monopolisation of media spaces and the broken down social contract.

Further noting the massive increase in corruption and arbitrage, and vested self interest, in every sector of the economy including command agriculture, fuel, Covid-19 donations, procurement and commodities.

LOCATING Zimbabwe’s multiple faceted crisis, to the unresolved crisis of legitimacy, and the stolen election of July 2018.

REALIZING that the Lockdown has been abused to lock down only the people and the MDC Alliance and to further ambush the people with the Supreme Court judgement and recalling of People’s MPs.

Concerned that the concerted attacks and desperate measure unleashed by the State, Zanu Pf and Mr Mnangagwa on the MDC Alliance.

Further concerned by the regime’s obsession with the MDC Alliance at the time when the country faces unprecedented multiple crisis including an economic meltdown, Covid-19, hunger and starvation.

Further concerned by the brazen capture and use of State institutions to further undemocratic power retention agendas of Mr Mnangagwa and his illegitimate cronies.

CONVINCED that what is being witnessed is a war by Mnangagwa and ZANU PF through proxies against the MDC Alliance having not forgiven the party for defeating him in the 2018 general elections. The end game is to totally annihilate the opposition and establish a one-party state.

Further Convinced that the biggest ‘crime’ that MDC Alliance and its candidates committed was to garner over 2 million votes in the last presidential elections; which is a serious threat to the system and reason for these frantic efforts to destroy or eliminate the MDC Alliance.

THEREFORE, in this context, the National Standing Committee of the MDC Alliance met today in Harare and made the following resolutions

(i) The NSC noted the judgement of the Supreme court that ws handed down on the 30th March 2020 in the matter of MDC Case No SC56/2020. The NSC categorically restates that , the party , the MDC Alliance was not a party to this litigation.

(ii) The NCS restate that a political party is a voluntary organisation of willing people and the MDC Alliance, was created through the voluntary agency of the Zimbabwean People whose right to form a political organisation is protected by the constitution of Zimbabwe and cannot be interfered by any power or authority.

(iii) The NSC noted the undisputable legal fact that the MDC Alliance is a separate legal entity from the MDC-T and participated in the election of July 2018 as MDC Alliance and that same entity held its congress in May 2019 as MDC Alliance.

(iv) The NSC restates that any attempt to infringe or impinge on the existence of the MDC Alliance is an assault on the Constitutional right of the same.

(v) The Supreme Court judgement has engendered illegalities and created unconstitutional outcomes which include the following,

• The judgment also conflates three different organisations the MDC, the MDC-T and the MDC Alliance (the latter two which competed against each other in the 2018 election).

• Ignoring the juridical fact of the MDC Alliance being established by virtue of participation in the 2018 elections.

• Ignoring the juridical act of the MDC Alliance congress of May 2019.

(2) The recall of MDC Alliance members of Parliament

(i) The NSC notes that a separate independent the MDC Alliance participated in the election of July 2018.

(ii) That being so, the NSC condemns as wrong and false, the decision taken by the Speaker of Parliament and the President of the Senator in recalling 4 members of Parliament namely, Our Chair Thabitha Khumalo, Our secretary general Chalton Hwende, Lillian Timveous, and Prosper Mutseyami.

(3) The position of MDC Alliance in Parliament

(i) Pursuant to the above, the NSC resolved that with immediate effect the MDC Alliance suspends the membership in parliament by its members of Parliament pending consultation with the electorate and other stakeholders on the way forward.

(ii) For the avoidance of doubt this means that no MDC member shall attend any parliamentary committee or the sitting of parliament or any official business of parliament until such time as a decision is made.

(4) The Protection of the Struggle

(i) The MDC Alliance has noted that Morgen Komichi, Douglas Mwonzora and Elias Mudzuri have decided to cooperate with ZANU PF and the state. They, therefore, have expelled themselves from the MDC Alliance and are forthwith relieved of their positions and membership in the party. They are further withdrawn from all positions to which they had been deployed by the party. Replacements have been made and shall be announced in due course.

(ii) The party resolved to take all the necessary steps to recover all the gains of the peoples’ democratic struggle.

(iv) The MDC Alliance will not accept the holding of a ZANU PF organized extra-ordinary congress in the MDC. ZANU PF cannot write another political party’s constitution and hold a congress on its behalf to impose a puppet leadership.

(i) The National Standing Committee took note of the COVID19 pandemic and the dislocated livelihoods of the vulnerable and the majority of Zimbabweans who are surviving in the informal sector.

(ii) The illegitimate regime has provided no safety nets whatsoever to assist the despondent Zimbabweans. They have instead destroyed the vending stalls where the majority of Zimbabweans are seeking a living through informal trading

(iii) Pursuant to our Agenda 2020 program of action, we put forward the five fights that we, the people of Zimbabwe must pursue this year. They are as follows;

We now call upon the people of Zimbabwe to build a broad consensus and united front of all progressive citizens to address the national crisis. 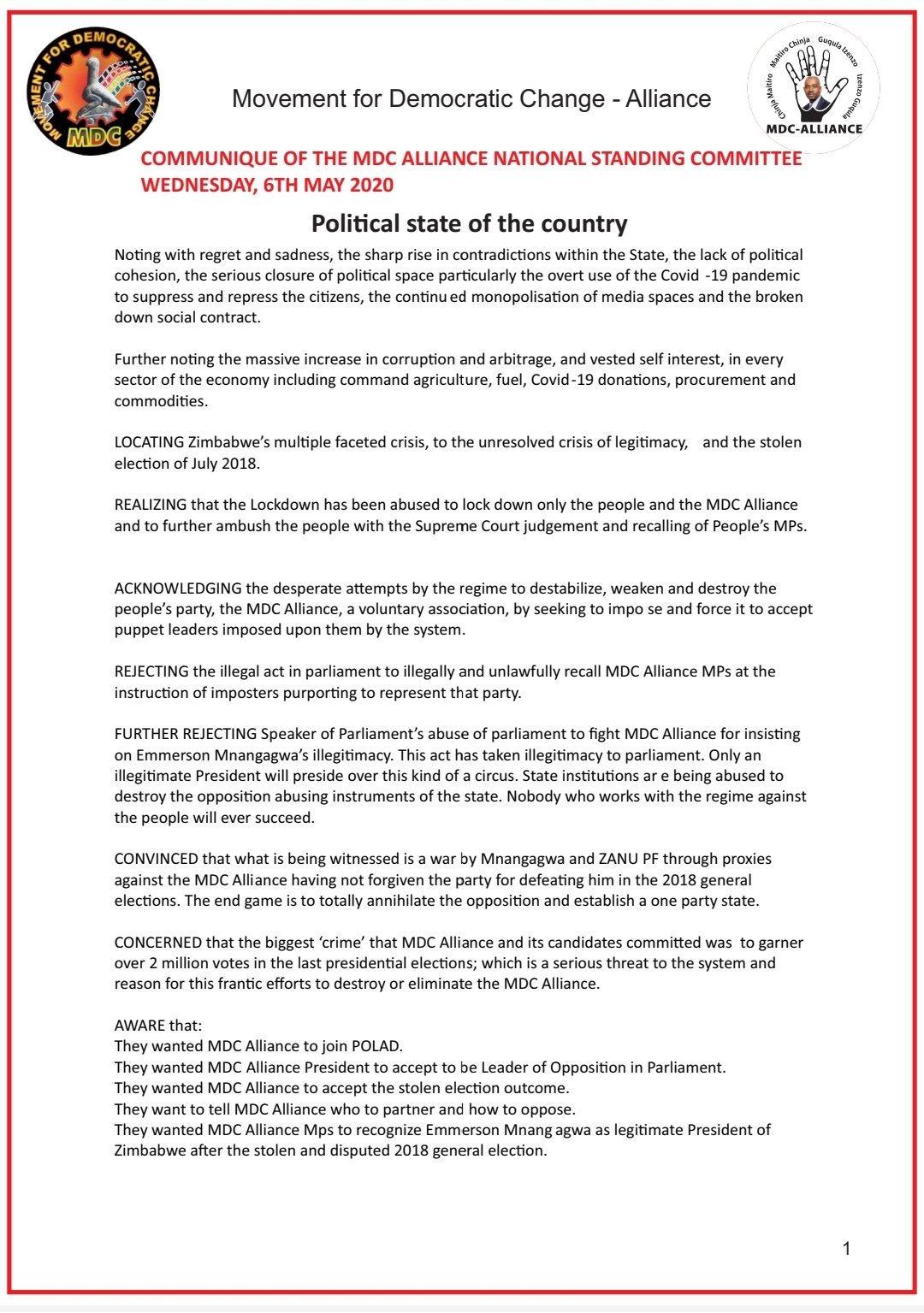 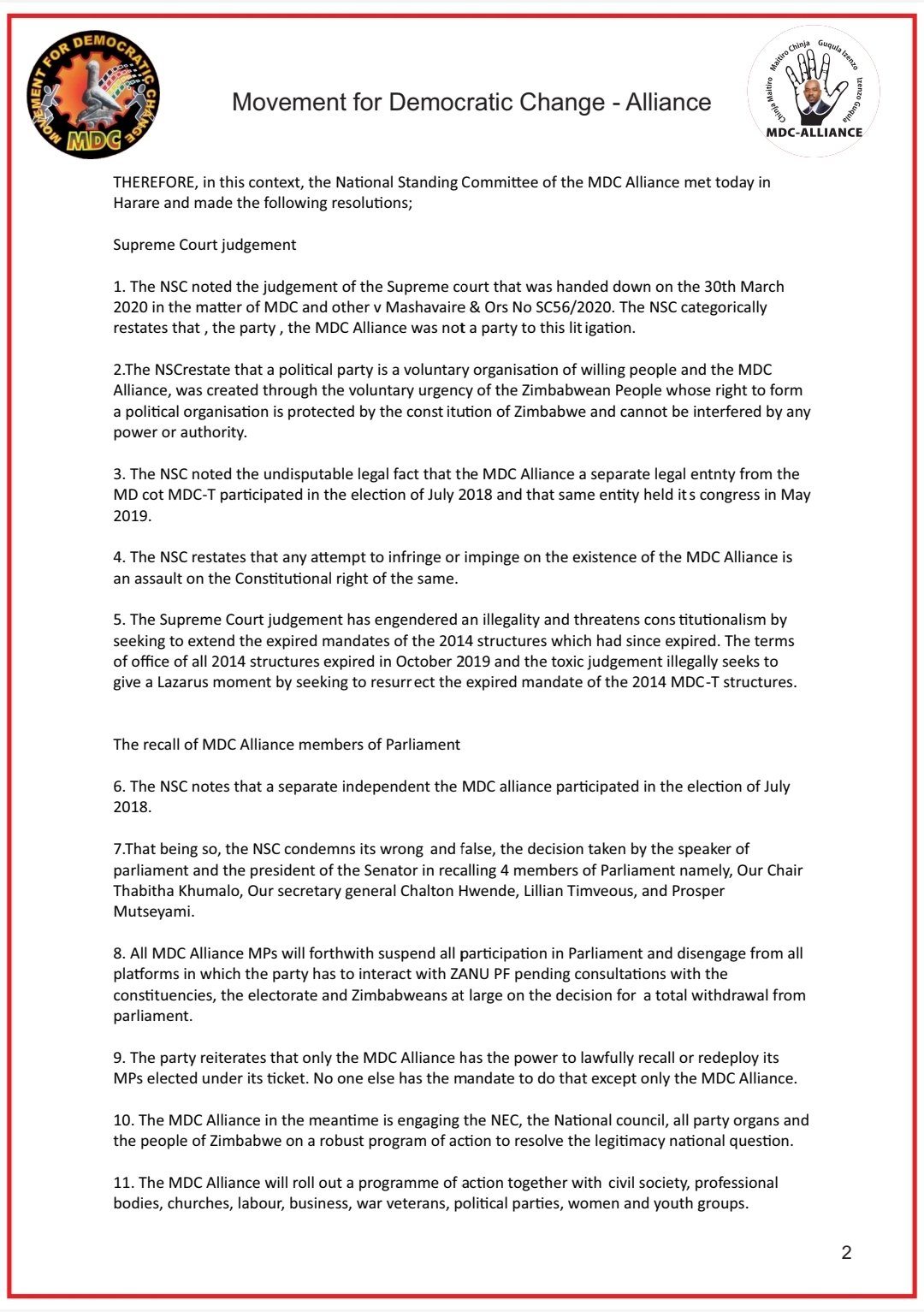 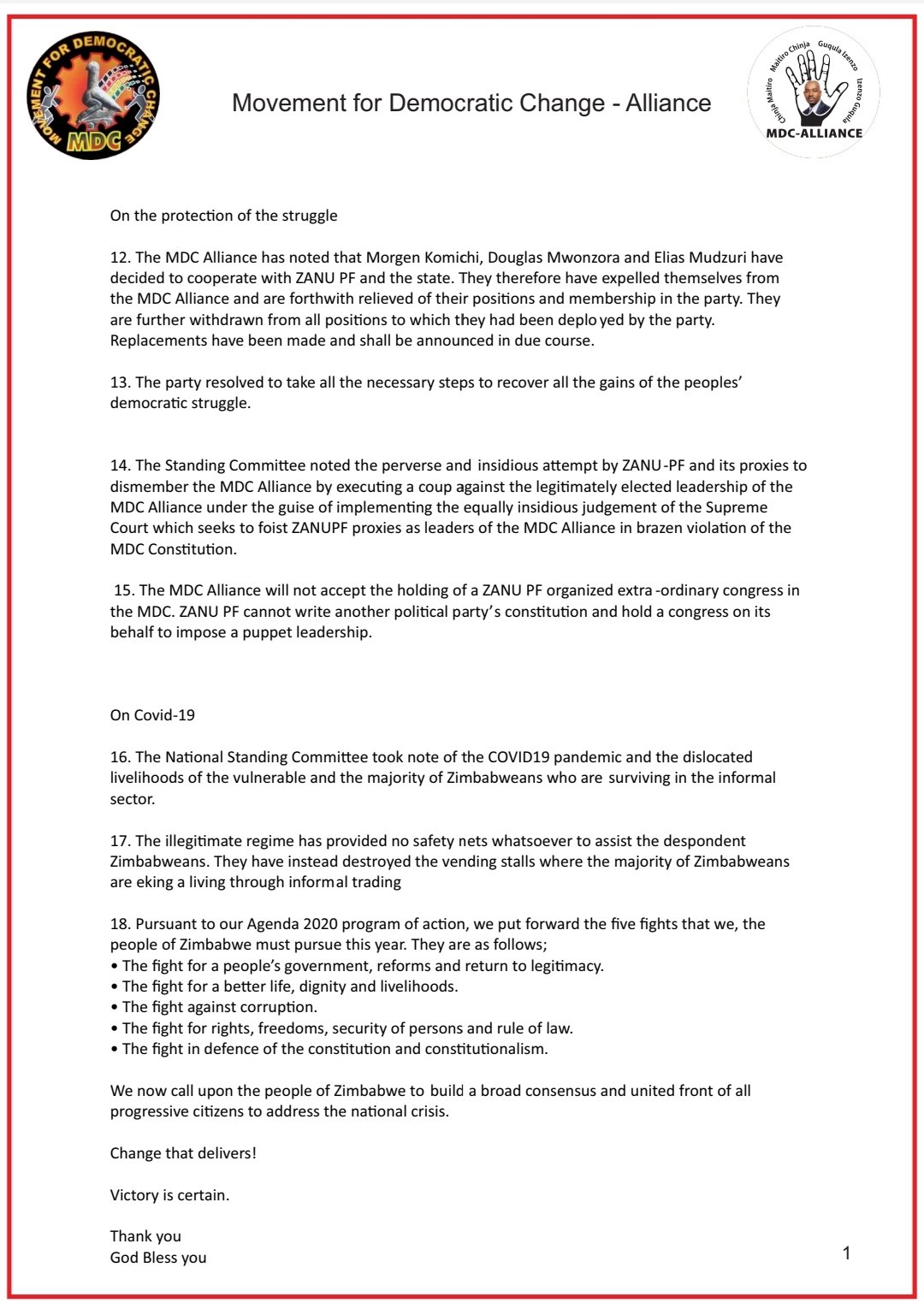