The Reserve Bank of Zimbabwe (RBZ) has suspended operating licences of some Bureaux de Changes and other entities accused of fueling the parallel forex market exchange rates.

In a statement issued on Thursday, the central bank said that the statement was an update following the suspension of operating licences of Cash Twenty Four (Pvt) Limited and Credconnect (Pvt) Limited for allegedly participating in illicit foreign currency transactions.

RBZ added that both entities were referred to the Financial Intelligence Unit (FIU) which investigated and charged them for not adhering to the anti-money laundering requirements, interalia, failure to record and report transactions as required by the law.

The two institutions carried out several off-book foreign currency purchases and sales which they did not declare in periodic regulatory returns.

Cash-Twenty Four has since admitted the charge of failing to record and declare foreign currency transactions and has since paid the imposed administrative fine of ZW$2 500 000 (two million five hundred thousand dollars). The case against Crediconnect is still pending determination.

The Bank, has with immediate effect, suspended the operating licences of Shons Finance Services and Kwik Forex, pending further investigations and regulatory action. The Bank has referred the unlicenced entities (Stallion, Forbes and Juso Global) to the FIU for further investigation and appropriate action in terms of the law. Meanwhille, the Financial Intelligence Unit has frozen all the accounts of all the above mentioned entities. 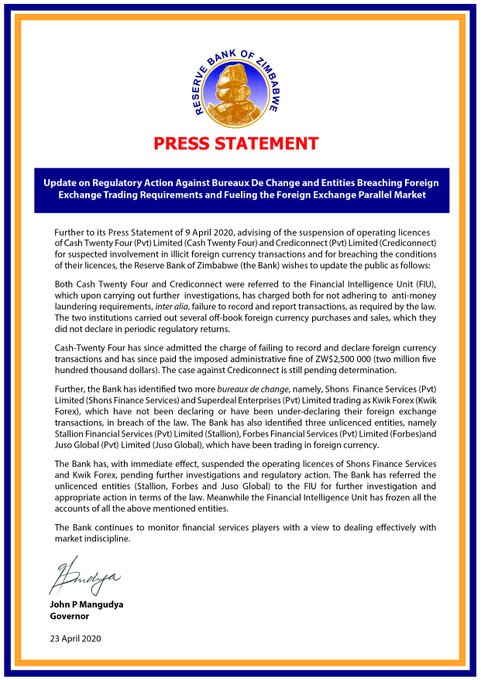