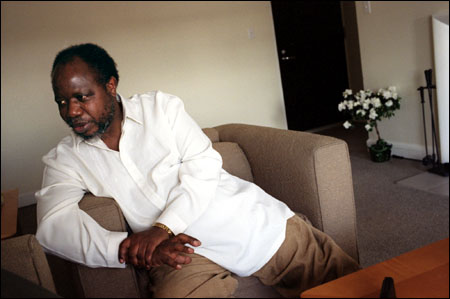 Geoff Nyarota is a new Nieman fellow and a former editor of the Daily News, a newspaper in Zimbabwe. He was forced to flee the country for unflattering coverage of Mugabe. He is pictured in his Cambridge apartment. Friday, March 31, 2003. Staff Photo Stephanie Mitchell/Harvard University News Office

A GoFundMe campaign has been launched by Zimbabwe journalists to raise US$25 500 needed by renowned journalist Geoffrey Nyarota to undergo heart surgery in India.

Nyarota (69), was diagnosed as needing to undergo a coronary angioplasty (a procedure used to widen blocked or narrowed coronary arteries) by a group of doctors in India.

In a video accompanying the appeal on his GoFundMe website, Nyarota said:

I’m privileged to be the intended beneficiary of this special initiative which was launched by my colleagues in the Zimbabwean media fraternity.

Nyarota is an award-winning Zimbabwean journalist and human rights activist who founded the Daily News in 1999.

The original Daily News was critical of the government and very popular with the masses so much that it was petrol-bombed by suspected State agents and eventually shut down by the government at the turn of the Millenium.