Harare Mayor, Cllr Hebert Gomba has refuted claims that Harare City Council did not go through the required tender process when they identified companies to do the General revaluation roll.

Those that thought we gave tenders to companies to do the General revaluation roll without tender, here are your answers, one thing for sure is we are following all the processes and procedures in our way of doing business.

He attached the picture below which is a 2019 invitation to tender for the above tender. However, @Napoleon Hove responded to the tweet suggesting that there was nepotism. Hove said:

Are you aware that the company called Global World Properties belongs to a certain Emmanuel Mutambirwa who is the Manager in the Valuations and Estates Department at City of Harare? 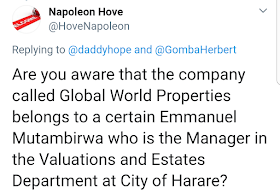 We acknowledge the fact that it went to tender. The question is was this tender conducted in a fair and just manner? Emmanuel Mutambirwa fought tooth and nail to award this tender to his company Global World Properties. 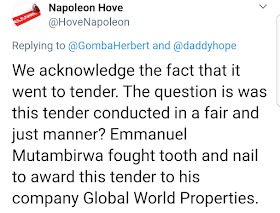 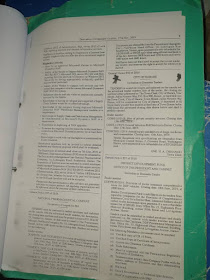 The local government authority has for long now been accused of failing to observe principles of good governance including transparency and accountability and this is believed to have affected service delivery by the sub-national government.