The government of Zimbabwe has put on hold first-year student intake for this February as it moves to introduce the new syllabus in tertiary institutions.

This was revealed by Higher & Tertiary Education Minister, Prof Amon Murwira, who said that the government is focusing on the University syllabi to fit the 5.0 education thrust, therefore, intake for first-year students is to be done in August. 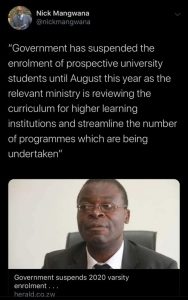 Since the time of exiled former Minister of Higher and Tertiary Education, Jonathan Moyo, the government has been moving to adjust tertiary institutions’ syllabi to make graduates capable of coming up with solutions to contemporary issues.

Back then, Jonathan Moyo argued that Zimbabwe is full of unemployable graduates because they are not relevant to contemporary issues.