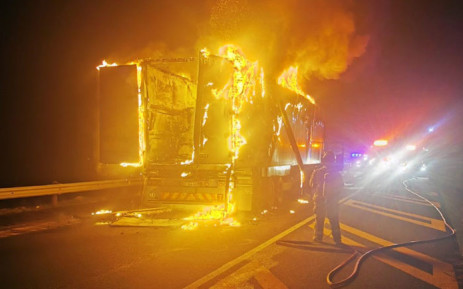 A truck was reportedly set on fire in a suspected xenophobic attack on the N1 highway near Worcester, Cape Town, South Africa.

According to Eye Witness News, the arsonists (three of them) blocked the road, ordered the driver out and torched the truck.

Chairperson of Parliament’s Select Committee on Trade and Industry, Mandla Rayi said that they will not tolerate attacks motivated by xenophobia. He said:

We are against xenophobia, and we don’t agree with attacking workers. It doesn’t matter which continent or part of the world they come from.

… We’ll be engaging with the affected ministeries, especially the Department of Labour.

Meanwhile, xenophobic attacks have flared up in Gauteng Province since Sunday with five people confirmed dead and over 180 South Africans arrested for looting and torching businesses.