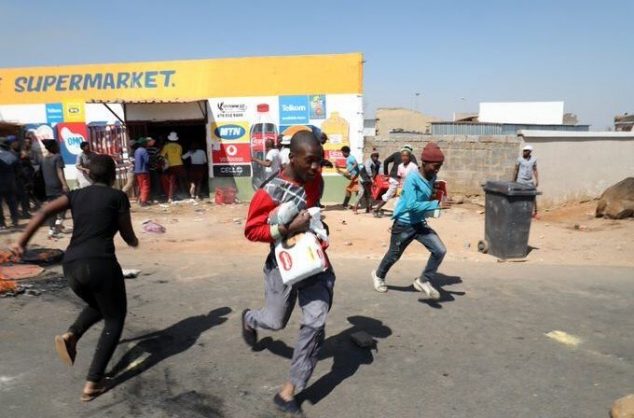 Xenophobic attacks were on Wednesday night witnessed in South Africa’s Soweto area as hundreds of locals descended on spaza shops owned by foreigners.

The looting spree broke out in areas such as Zola, Emdeni, Moletsane, White City, Zondi and Rockville.

The incidents were confirmed by Police spokesman Capt Kay Makhubele. He said:

At the moment it is not clear what started this. We are yet to determine the wide scale of the looting, but we have members on the ground monitoring the situation.

The police were, however, not in a position to establish whether any injuries had been reported or any arrests made.

Residents said that the looting was in revenge of attacks on police officers by foreigners in Johannesburg’s CBD more than two weeks ago.

Foreign traders forced the police into a hasty retreat after coming under a sustained rain of stones as they attempted to force their way into buildings believed to be used to store counterfeit goods.

Speaking to the Sowetan, a resident, Tshepo Lehohla said:

How can people from out of this country attack our police officers? Police in other countries would not tolerate that. People are angry because of that.