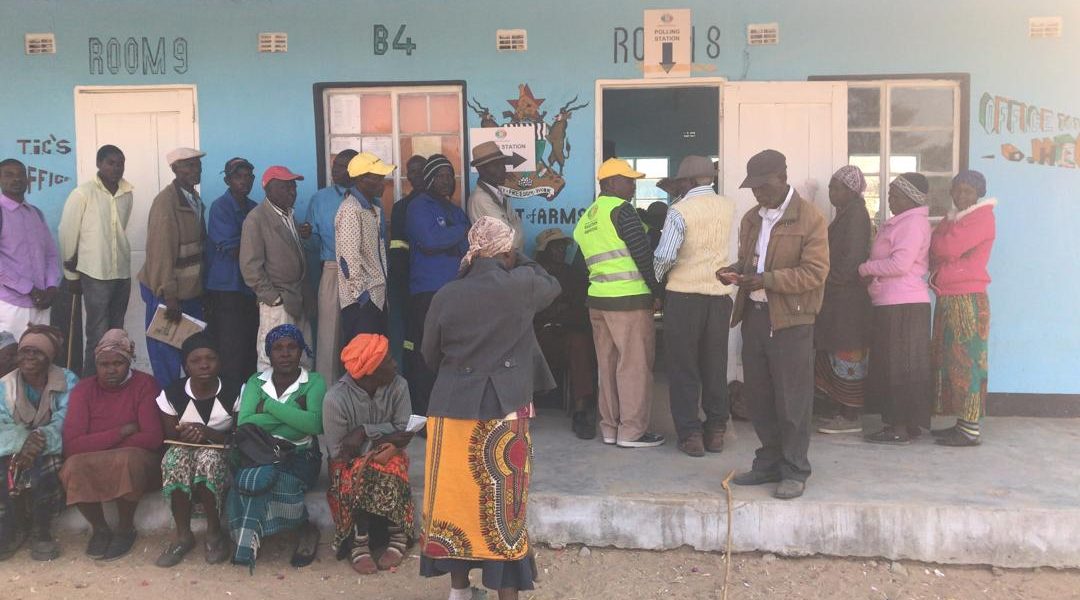 Voters at a Polling Station in a rural constituency. Image: ZEC

Zanu-PF won the Lupane East by-election this weekend by a considerable margin. The Zanu-PF candidate Mbongeni  Dube got 6,369 votes against the MDC candidate’s 4,505. Zanu-PF effectively retained the seat which they had won in the July 2018 elections.

LUPANE B. ELECTION :
Mdc shd not take the economic melt down of the country as their only vehicle for compaign. A lot has to be done to change the mindset of rural folks.

I can confirm that ZANUPF and @MthuliNcube have withheld money lawfully due to the #MDC . This is just another facet in a flawed electoral process. Another is the flagrant use of State resources by ZANUPF in full view of @ZECzim which turned a blind eye to it. https://t.co/OMiM5FNUUW

Before Morgan Tsvangirai got really ill, we had started on a journey that wld have helped MDC make data-driven decisions. We still have time folks. Lupane should be a wake up call. We should embrace technology, it is cheaper and more efficient – ask Obama!

Now MDC is accused of failing to intimidate people or buy votes in villages? I give up. Wish these keyboard analysts understand how ZANU operate in villages pic.twitter.com/DR9sJKZsa6

If you are saying rural folk rely on you for everything and shouldn't choose government then you clear are not giving them enough because how come they are being bought by so little?

LUPANE EAST BY- ELECTIONS RESULTS RESULTS FOR 61 of 62 POLLING STATIONS.

The Lupane By-Election result in which ZANUPF retained the seat confirms my argument that the MDC needs grassroots structures. That is the only way they can start winning in rural areas. Rural folk won’t vote for candidates who only appear when its election time!Grassroots or die pic.twitter.com/fV7R8XTC62

A statistical analysis of the Lupane East by-election result shows that the MDC improved its vote from the 2018 election. It lost but it reduced the margin of loss significantly. In 2018 it lost by more than 2000 votes but now its 1634. It means @JMafume is on right direction! pic.twitter.com/dW6pWtjy4Z

MDC has been consistent in the following:
Rallies
Moaning after every election
Complain about electoral reforms just before and after elections @LynneStactia pic.twitter.com/6rr9pZkSur