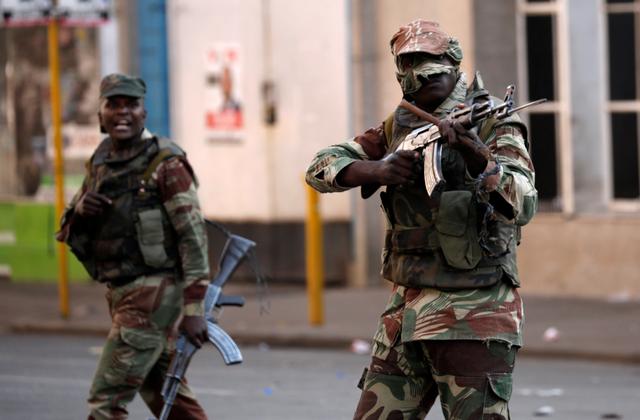 Today marks yet another very important day in the recent history of the Zimbabwean people’s struggle against dictatorship, oppression, tyranny and theft of elections.

This day we remember fellow citizens who lost their lives at the hands of the State on 1/8/2018. They had names & families behind them:‬

We can’t forget & we will never forget.

On this day in August 2018, we saw the brutal, merciless, senseless and heinous murder of unarmed and innocent civilians in the Harare central business district.

The event of 1 August 2018, in itself, demonstrated to the whole world the crisis of governance that has defined the character and nature of the problem in Zimbabwe.

The violence witnessed in the Harare CBD brought untold suffering, not only to the families, relatives and friends of the deceased but to the nation as a whole.

It is indeed unpardonable that in the 21st century, those entrusted with the protection of the constitution and the people would conjure up schemes to maim and eliminate the same in order to protect their ill-gotten comforts and privileges and satisfy their insatiable thirst for power.

In short, it is now clear for all to see that, concerning the style of leadership, those in the state have learnt nothing and forgotten nothing.

‪The August 1 fallen citizens were victims of a system which devours its own children. The brutality is fuelled by a longstanding culture of impunity.

If the nation had punished perpetrators, there would be no incentive to commit violence in the name of power and politics.

But the Incumbent since 1980 always protects and rewards the callous perpetrators of violence.‬

‪It is common knowledge that the state reacted with excessive force in the circumstances of the demonstrations. Even the Motlanthe Commission, with all its limitations, found that ‬the conduct of the State was “unjustified and disproportionate”. However, those responsible have not been held to account.

We must enforce measures to redress this grave injustice. What is disheartening is the plight of the victims who have received no reparation. Victims of orchestrated brutality must be compensated. Justice must be done.

Over and above this, we have witnessed an increase in abductions, harassment and intimidation of democracy activists, civil society and leaders of the opposition including members of parliament.

The attempted abduction on MDC youth leader, Obey Sithole by unknown men with unmarked vehicles, armed with AK47 guns is both a reminder and a confirmation that Zimbabwe, being unsafe for its citizens and visitors, is a country under extreme terrorism and severe violence.

The path to progress begins with an honest acknowledgement of failings. The cost of power is responsibility. A genuine people’s government has a duty to protect, repudiated on August 1 & again 5 months later.

That’s why it’s gross irresponsibility for ministers to threaten to unleash the military upon the people.

We believe in giving peace a chance. We must make peace happen in Zimbabwe.

On that score, we have offered a credible and signposted dialogue to resolve the deep problems Zimbabwe is facing.

Today, as we remember those who lost their lives on 1 August, let us remember that peace is a collective responsibility and a universal duty.

It is incumbent upon every citizen to play a part in building a great and stable Zimbabwe.

We cannot be enemies to something that derives its authority from us. We pray for the souls we lost.

Peace in Zimbabwe!
Today we build a better tomorrow!

Change that delivers!
Thank you and God Bless You