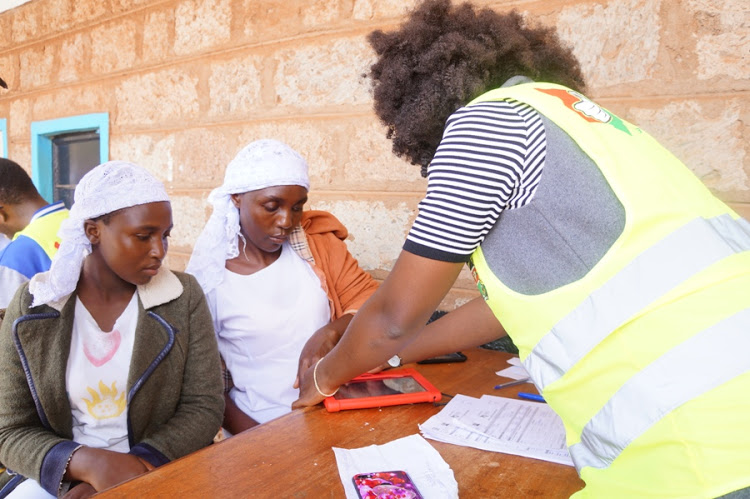 Members of the Shona community get registered with Huduma Namba at Kinoo chief’s offices in Kikuyu constituency on April 22 Image Credit: GEORGE MUGO

Shona-speaking people in Kenya are deeply concerned about the ongoing discrimination against their communities by the Kenyan government.

The Shona-speakers arrived in Nairobi, Kenya’s capital, from Zimbabwe over 60 years ago.

They arrived in Kenya as missionaries two years before the country gained independence in 1961.

Since then, the Kenyan government has classified them as stateless and could not clear them to go back to Zimbabwe since it could not recognise how they entered.

The Shona people are now trying to get citizenship as statelessness means that they cannot get identity documents.

Virginia Moyo, a Shona member living in Kinoo trading centre in Kikuyu, was born in the country by her Shona parents, says her daughter sat the KCSE exam at Secondary School, but the school declined to issue her with the results. Said Moyo:

We have suffered a lot due to the lack of IDs. We are worried since issues are getting tighter since we are resorting to educating our children at home just to know how to read, write and do calculations so they can be informed.

The population of the Shona people has reportedly grown to approximately 4,500 stateless people.

Failure to obtain IDs means that it is hard for them to resister businesses since they do not have Kenya Revenue Authority PIN numbers.

Even in death, statelessness follows the Shona people since IDs are asked for to enable a chief or an assistant chief to issue a burial permit.

A community member, James Koba, had this to say:

We do businesses such as knitting clothes, pullovers, mats, kiondos (shopping bags), carpentry and mechanics.

Some of these do not require an ID to start. When we see the government or county government wants to question how we pay rates, we close them and remain idlers.

Those of us who schooled in the 1980s and 90s, we interacted with locals and even learnt Kikuyu dialect in lower primary. We know Kikuyu just like we speak English, Kiswahili and we never dropped Shona. We are also fluent in it.

There are some of us who are married to Kikuyus. Their wives have helped them start businesses, register them, pay for licences and much more, and they have excelled.

Maria Budi, a member of the Gospel of God Church revealed that Zimbabwe cannot register them since immigration laws have changed, and they cannot also be allowed back. Some do not even know where they could go to start making a living.

Gospel of God Church (GGC) was founded by Baba Johane in early 1932 and was opened on October 1, 1932, at Mt Marimba in Zimbabwe.