A photo taken at Robert Mugabe International Airport suggests that there is no power at the airport. Informed people have said that this has been the norm for some time now.

Zimbabwe is having a huge power deficit resulting in the local power utility, ZESA, implementing crippling power cuts, locally known as load-shedding, which has seen most parts of the country going without power for 17 hours daily.

Power insufficiency is attributed to limited power generated at both Kariba and Hwange due to, in that order, shrinking water levels and ageing power generators.

Zimbabwe is also no longer importing electricity from South and Mozambique due to huge debts owed to ESKOM and Hydro Cahorra Bassa. 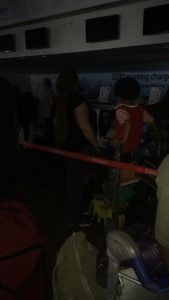