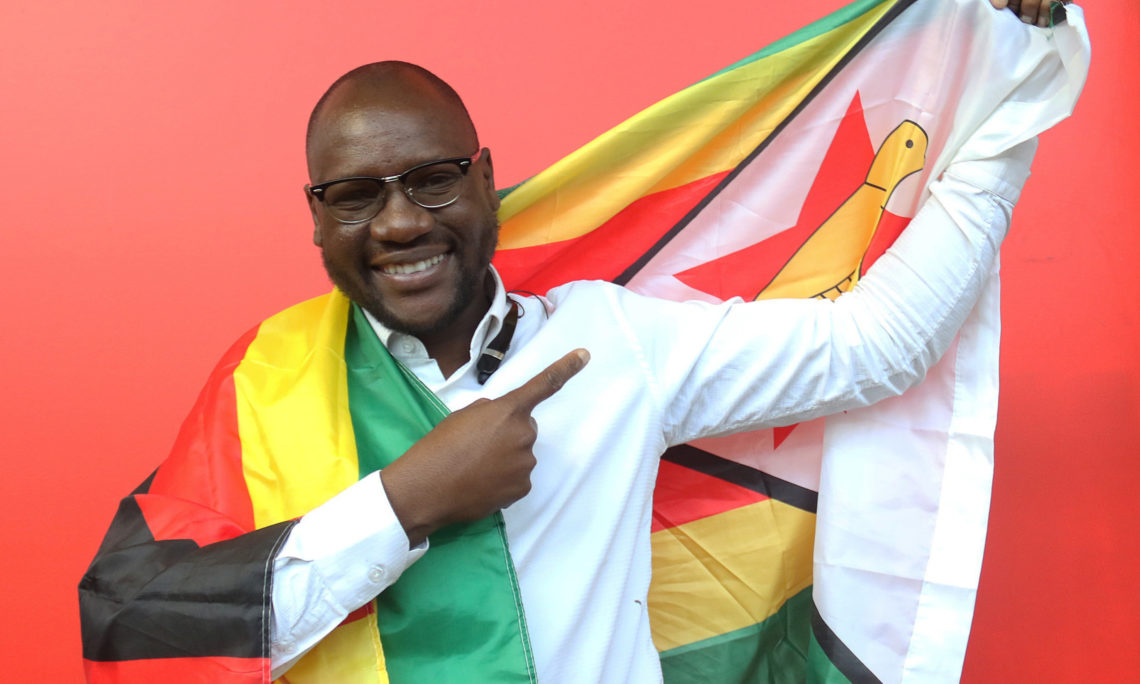 FILE – In this Tuesday May 3, 2016 file photo, shows Evans Mawarire, a young pastor, posing with a Zimbabwean flag in Harare, Zimbabwe. Zimbabwe police have charged Mawarire on Tuesday July 12, 2016, with inciting violence and disturbing the peace. (AP Photo/Tsvangirayi Mukwazhi, File)

…We stood up, and holding his famous stuff in one hand, he said referring to me and my colleague, you are in a race, but in a race there are some who win and others who fail to make it yet all of you will be part of the race, up to now I do not know what he meant. He said to the two of us, between you two, one will win, but another will fail in the race that you are participating

The jailed clergyman caused a media frenzy a few years ago as Zimbabwe got the chance to know what happens behind vestry closed doors at his church. Gumbura was/Is the leader of End Time Messages and he is still the founder of his church which he founded in 1978. The polygamist cleric had/has 11 wives, 30 children and at one point owned 20 cars. The preacher went down for rape as female congregants came out to accuse him of rape and he was subsequently convicted and sentenced to 50 years in jail. The press and social media had a field day reading and learning more about him during his trial in 2014. 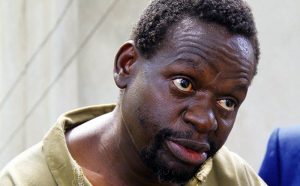 Pastor Evan became famous for his activism back in 2016 when he would record a video that would start with ” today is day ….” the movement gathered momentum to an extent of shutting down the country on July 6 2016. He became famous after that as he was arrested on treason charges and was in court where hundreds of people gathered outside the court waiting for the magistrate to fairly preside on the issue. He was freed on 13 July 2016 after a dozen lawyers offered to represent him.

I’m sure you have seen a poster written Kutumwa KwaPaul Mwazha weAfrica.  Paul Mwazha is the leader of the African Apostolic Church. This is probably the third church that worships on Saturdays besides SDAs and Johane Marange. Paul Mwazha is so famous that many people only know his church as Mwazha and not by its original name. He established his church in 1955 and his ideology includes :

Advocate/President/Pastor Chamisa carries so many titles on these streets. He is an AFM Pastor and an officer of the court and the MDC President at the same time. However, for now, we will focus on his religious title. Chamisa, hate it or love it is more famous for his other titles especially the political title. Chamisa is more famous for giving our current president a run for his money in last year’s first election after Robert Mugabe’s demise. However, Chamisa has taken to the podium to reveal his other tittle like in the case of this video where he is seen preaching in his church.

He sits on many Roman Catholic Boards including the School Board Of Governors, Provincial Superior of Jesuits in Zimbabwe and a member of the Catholics Commission For Justice and Peace. 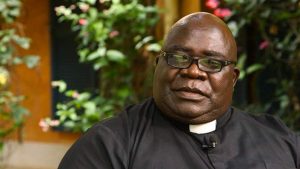 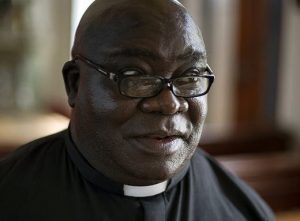 Prophet Oscar as his new calling demands that he be called, has already misfired in his ministry’s infancy predicting a win for Zimbabwe and Egypt and calling it a prophecy. The Warriors lost to Egpyt that night.

The Back to sender prophet is more famous for his back to sender stance than his calling as a religious leader in most circles. Very few people know the exact church where Mutumwa Masango leads but most people know him for his famous “back to sender ” gospel where he allegedly heals people by sending the demons tormenting someone back to its sender. Madzibaba Masango as some would prefer to call him is also a press darling as he frequents in the press for different reasons. This year he lost his 3 children in an accident that happened near Marondera in March.

Watch him in action on this video:

The Bishop’s work in God’s Ministry started 3 decades ago. Tudor is one of the most celebrated Zimbabwean clerics. The Scandal free cleric barely gets any hits on any search engine except the obvious one about his work and his life as a religious leader. Tudor Bismark is also a Philanthropist who has worked extensively in different projects and initiatives that ranges from extensive medical programs, orphanage operations, humanitarian relief, national leadership initiatives, educational scholarships and funding.  He has published the following books

We may forget anything about the cleric but we will never forget the miracle money frenzy that bears his name.. Uebert Angel is probably the richest clergyman from Zimbabwe according to Wikipedia.

Angel’s net worth has been one of much discussion and debate. His net worth is estimated to be between $40 million and $60 million, and he is said to be one of the top 20 richest pastors in the world. He currently has assets in the UK, Europe, USA, and Africa including his residence in the UK, which is a reported $4 million mansion with a 14 acre garden attached. His Sam Barkeley Construction company recently bought an electric power station in Sleaford Town Centre which they have started demolishing in order to build houses for sale. The estimated total sum of his real estate projects is around $20 million. This includes a total of 300 properties in Botswana, Zimbabwe, South Africa, Bulgaria, United Kingdom and the United States of America. Angel has a seemed passion for motor vehicles. He has a reported collection of 47 vehicles around the world which include a Lamborghini worth nearly $281 000, Black Badge Rolls Royce, a Mercedes coupe, an SL 500 new shape Mercedes, Audi Q7 and a Spyder F3 CAN -AM special series worth about $25 000

Uebert Angel Madzanire is the founder and leader of Spirit Embassy Church now Good News Church. He is known for his charismatic and flamboyant lifestyle. He drives the latest expensive cars 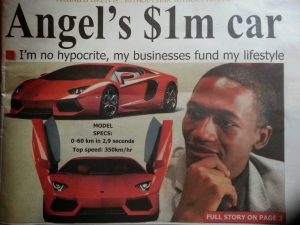 Madzinire is known to be a very savvy businessman with investments in real estate, banking, and fashion

The street preacher has headlined for his straight talk especially against the government. The preacher is so popular for his prophecies and his social commentary on current political issues. Check out his videos.

Probably the most famous cleric (apart form Nelson Chamisa) from Zimbabwe. Emmanual Makandiwa was born Shingirayi Chirume on 25 December 1977. He worked as Madziyire’s assistant after bibble school and he started an interdenominational assembly in 2008 that eventually gave birth to his ministry today the UFIC. Makandiwa is known to be one of the first Prophets to start the charismatic ministry. During his ministry’s infancy and through the years that followed he headlined for

Hate him or love him, Makandiwa is a charmer who eloquently delivers his sermons. The teachings that trend on social media by him are full of realistic advice. Watch him in action below

Baba Guti as he is affectionately is probably one of the most prominent religious leaders in the country.

Here is a video we made about him;

Apostel B Java’s brother is one famous Zimbabwean. Passion trended more a few years ago after he divorced his wife and married another woman a few short months after that.  However, Prophet Passion’s love life is not the only thing that made him famous. He is known to live a flamboyant lifestyle as he is constantly seen taking a vacation in The Bahamas where he makes videos like these.

He is also known for :

Find out other videos about the prophet here.

Passion Java also drives the latest cars and was rumoured to own a chopper a few weeks ago. 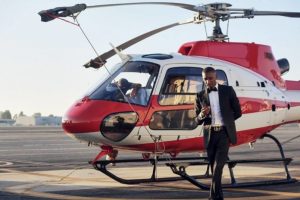 Walter Magaya is scandal-ridden and is probably one of the few clerics that have visited police stations more than we can count on one hand. Here are the 7 headlines that involve Walter Magaya’s name

Magaya is also a Philanthropist who has at one point donated $56,000 to the Zimbabwe National Soccer Team ahead of its COSAFA games in South Africa after the country’s main football organization, ZIFA, failed to raise enough money to pay for the trip to South Africa. Players were ordered by ZIFA to attend Magaya’s church session by ZIFA officials and at the church service were handed gifts and the prophet prayed for them. On 12 June 2015, Magaya once again paid for the men’s national soccer team’s expenses. He paid their outstanding allowances and committed to pay for all the travel expenses to Malawi for their AFCON 2017 qualifier match.

I don’t know if I can call this clergyman famous or infamous. Prophet Madungwe as he calls himself says and has said a lot of things including but not limited to: