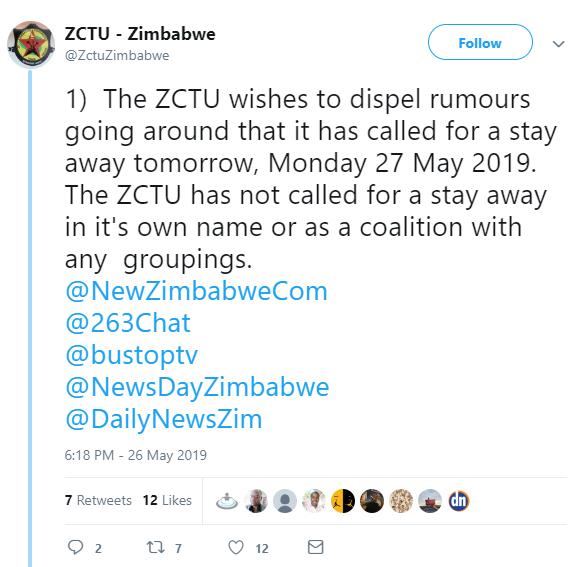 Peter Mutasa says ZCTU is not part of the Monday demos as social media purported.

The Zimbabwe Congress of Trade Unions (ZCTU) president, Peter Mutasa, has dismissed messages circulating on social media linking the labour union to a “shutdown” of the country on July 1.

A pamphlet that has gone viral on social media titled:

The message claims that the protests are being organised by pressure group #Tajamuka/Sesijikile, the Amalgamated Rural Teachers Union of Zimbabwe (ARTUZ), Zimbabwe National Students Union, ZCTU, human rights organisations, Community Water Alliance and a group representing vendors among others.

Speaking to the NewZimbabwe.com on Saturday, Mutasa said:

He, however, added that ZCTU was planning its own protests in the event that the government does not reverse the ban on the use of all foreign currencies for domestic transactions. He said they will announce dates for demonstrations next week after getting feedback from Cabinet on Tuesday.

ARTUZ leader Obert Masaraure also dismissed allegations that the organisation he led was part of the demonstrations.