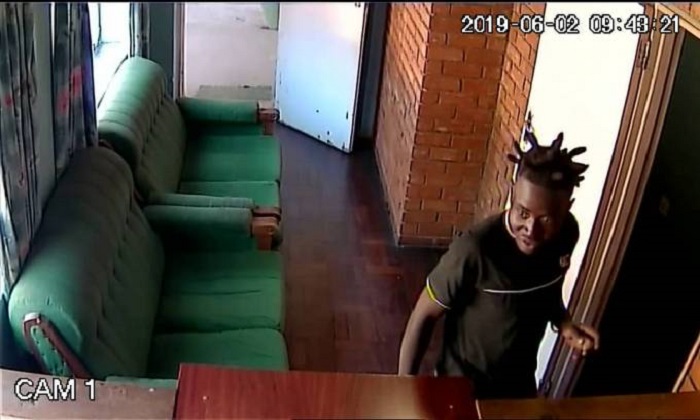 Suspected killer of Sex worker who was found dead with 666 inscribed on her belly at a lodge in Bulawayo.

Police in Bulawayo have released pictures of a man who allegedly killed a sex worker at a lodge and inscribed 666 and a star associated with the occult on her belly. Police are appealing for information that may lead to the arrest of the suspected satanic ritual killer. Below are pictures of the man as captured by the camera at the lodge. Ndlovu was found dead at Silver Sands Lodge situated at number 13 Connaught Avenue between Joshua Mqabuko Nkomo Street and Jason Moyo Street. Her body that was under the bed was discovered by a cleaner on June 3. She checked in at the lodge with the man (pictured) who gave a Pumula South address as his home at around 3 AM on June 2. The man later paid some more money for an extra day saying Ndlovu was still drunk. The man is reported to have left around 2 PM saying he was going to buy food and never returned. Medical reports suggest that she was strangled to death.

Bulawayo acting police spokesperson Inspector Abednico Ncube said police are appealing to anyone with information on the whereabouts of the man in the pictures above to contact Seargent Ncube on 0773 629 244 or Chief Inspector Chibira on 0292 71568/77523.

Alternatively, he said they can use police suggestion boxes dotted around the country if they wished to remain anonymous. The victim, Patience Ndlovu, from Cowdray Park suburb was found dead at Silver Sands Lodge situated at number 13 Connaught Avenue between Joshua Mqabuko Nkomo Street and Jason Moyo Street on June 3.