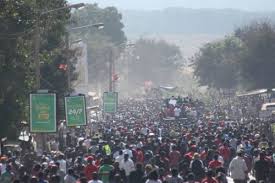 MDC president Nelson Chamisa has thrown his weight behind the people of Malawi who are engaged in protests against the outcome of a recent poll held in the impoverished central African country.

Reports indicate that protests broke out in many cities across Malawi as citizens demand the ouster of Peter Mutharika who was declared the winner by the country’s electoral authorities.

We note with keen interest developments relating to elections in Malawi. We call upon all Malawians of goodwill to ensure that political and legal processes yield justice to reflect the true will of the great Malawian people.

Chamisa is not a stranger to electoral disputes. He had an electoral dispute with President Emmerson Mnangagwa following last year’s elections which was ultimately settled by the Constitutional Court.

Chamisa launched a petition at the ConCourt arguing that the presidential election result is set aside. However, the Court dismissed Chamisa’s petition for lack of evidence.

One Comment on “Chamisa Following Developments In Malawi With Keen Interest”