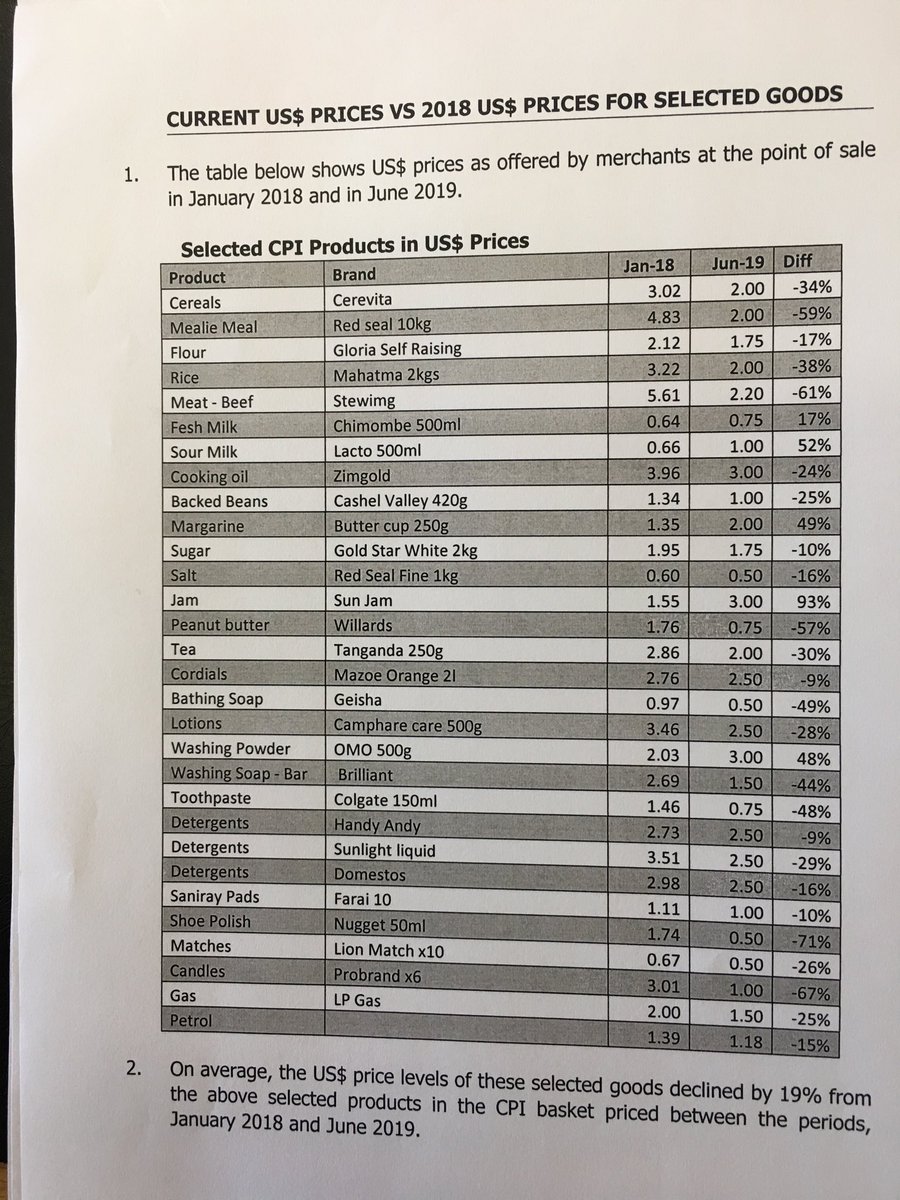 Finance and Economic Development Minister, Mthuli Ncube has said that prices in RTGS$ are grossly inflated because, in USD he said, prices have generally fallen.

The minister tweeted a table his ministry has prepared to back his point. The table shows the USD prices in shops in January 2018 compared to those in June 2019. The average price decline, Ncube said, is 19%.

Below are some of the reactions to Ncube’s statement, gleaned from Twitter:

The essence of bastardised @Cambridge_Uni education is to be as far removed from reality as possible. Case in point: @MthuliNcube. His capacity to lie with numbers is amazing. Chief Justice Malaba must have had folks like this in mind when he said he prefers facts to numbers! Prof. Jonathan Moyo

All this shows is that it was the introduction (and retention by you) of Bond notes and then RTGS$ which has introduced inflation. As sensible people and businesses are re-dollarising you are steadfastly ploughing ahead with your plans to introduce a new currency which will fail. David Coltart

It’s possible that for Finance Minister Mthuli Ncube, Zimbabwe is just one huge research project. As far as he’s concerned, he’s doing very well. And that epitomises the problem of intellectual elites who are more fascinated by figures & graphs, not the condition of the people.

His statements are so far removed from the lived realities of the people that they are beyond absurd. How does one express satisfaction that prices are falling in USD terms but doesn’t do the same regarding wages? It suggests a man who’s both out of touch & insensitive. Alex Magaisa

Teachers now earn US$29. Going by your schedule, a tin of Jam costs US$3. This means a teacher can’t afford 10 tins of Sun Jam. They can only buy 9 (US$27). Accordingly, a Zimbabwean teacher earns the equivalent of 9 tins of jam & 2 cans of beans (US$2). Let that sink in. Fadzayi Mahere

I am not sure what the Minister wants to achieve with this comparison? Assuming @MthuliNcube is right, what is the policy implication? Should we re-dollarize? Is this a sign of a failed currency? Is he using the official or unofficial rate of last year? Confusion runs supreme! Hopewell Chin’ono

Here is the best finance minister In the history of Zimbabwe according to Zanu-PF apologists. He uses RTGS to claim a budget surplus then on the other hand quote a drop in USD prices of goods that are priced in RTGS in supermarkets for consumers who are earning RTGS. Solomon Harudzibwi

You are far away from reality. Joyce Mujuru

Whilst we are busy discussing Surplus & US$ price decreases, @MthuliNcube & @edmnangagwa should realise that the political & economic crisis is claiming lives! A total of 129 suicide cases were recorded between the months of January & March 2019 in Zimbabwe. Hopewell Chin’ono

This comparison in $US terms is totally unacceptable coming from a finance minister who introduced RTGS$ & austerity measures which have crippled the have nots & aided massive looting & corruption by well-positioned government officials. Pay civil servants and pensioners in USD

This is the most irresponsible tweet I have seen. @MthuliNcube are you paying civil servants and pensioners in USD??? Tell us how you are going to deal with the black market rates which are increasing every day. I thought EDs government was for the people & not the elite. Linda Masarira

2 comments on “ZIMBABWEANS REACT: To Mthuli Ncube Saying Prices In USD Have Fallen”