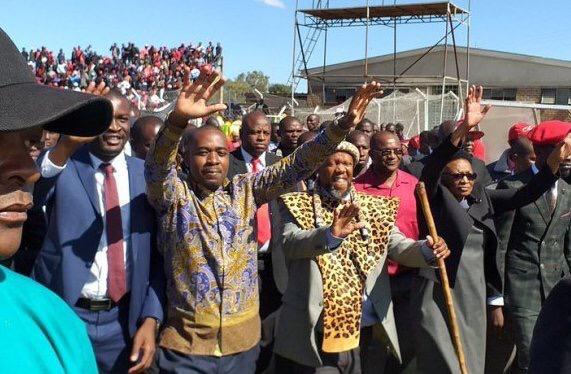 The MDC’s national council will meet on Wednesday where Chamisa is expected to rope in the likes of former ZANLA high command member, Bernard Manyadza whose Chimurenga name was Parker Chipoyera and former Energy minister Dzikamai Mavhaire.

The meeting tomorrow will bring the curtain down on Congress processes with the president making appointments to the national standing committee and the national executive as well as attending to other ancillary issues that need to be considered.

I would not be able to know on behalf of the president who he will appoint or not.

Manyadza told the Daily News that he attended the MDC Congress so that he could hand over the struggle for a better Zimbabwe to the younger generation.

He added that if the party considers that war veterans have a role to play, he was waiting to be contacted.

A source who spoke to the Daily News suggested that former war veterans leader, Jabulani Sibanda, could be roped in as well. Said the source:

Jabu could also come in as the face of the Zipra element along with several other cadres from the southern parts of the country that played a role in the liberation of this country.

There are also some doctors and accountants who are not necessarily part of the MDC family in terms of having been active prior that are coming on board.

Of course, the majority of the national executive council nominees will come from the party rank and file but there is a feeling in the party as expressed in the congress resolutions that it is the MDC’s obligation to unite the country after years of polarisation because of politics of hate perpetrated by Zanu PF hence the decisions.

Reports indicate that close to 600 party officials have submitted their CVs to be considered for appointment into the top party organs.

Several party bigwigs are expecting Chamisa to reward them for their loyalty, among them are Morgen Komichi, Happymore Chidziva, Douglas Mwonzora, Tracy Mutinhiri, Elias Mudzuri, Jacob Mafume and Amos Chibaya.