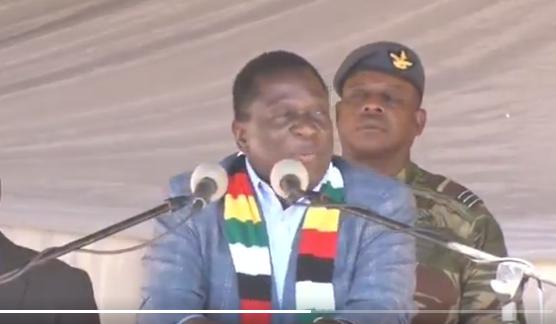 In a speech in Southlea Park, President Mnangagwa explained how Zimbabwe’s new currency will work. He said that the multi-currency regime had contributed to the uncontrolled increase in prices of basic commodities and that once Zimbabwe its own currency, prices would stabilise.

Those in the diaspora will send their money and so on. Investments will also come in the form of foreign currency. However, as a country, we are supposed to have our own currency. So we have started that journey. We have started it because right now you’re told the USD is 1:5 against the Bond note, and you wake up the next day the rate is 1:6, and the next day 7 then 8 and so on.

When they do that, they then say the price of bread and other things has done up, because of that exchange rate. But if you buy a bottle of Coca-cola, and you go to sleep, the next it will remain a bottle of Coca-cola. It doesn’t change. The same thing happens with a pair of tennis shoes. It doesn’t change value between days. It’s the same with a chair. The next day, it’s just the same chair. But they say the price has changed.

It happens because we don’t have our own money. We will get to a point where the America dollar or the Pound will be a currency you only keep but cannot transact with. When you want to buy, you will have to go to a bank to change and exchange it for our own money, which we will make. You will be told about this new currency.