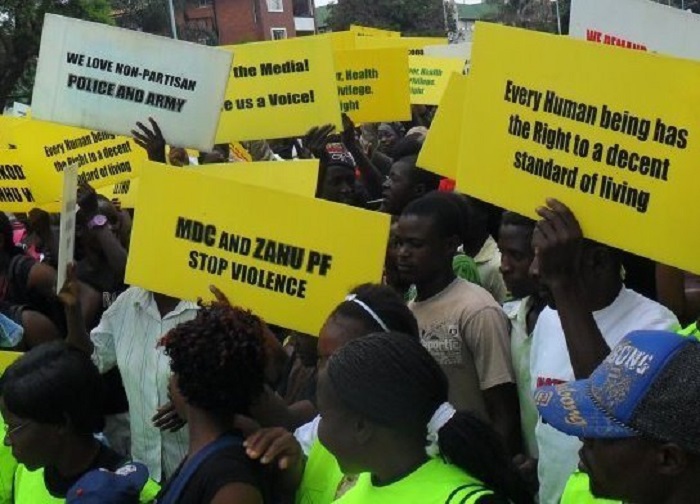 The continued clampdown on civic society activists by the government of Zimbabwe clearly reveals a deliberate attempt to close the democratic space in the country.
Crisis in Zimbabwe Coalition (CiZC) notes with great concern that the ‘new dispensation’ continues to label civic society organizations as agents of regime change and this has been the basis upon which the government has tried to justify its crackdown on the organizations whose mandate is to uphold democracy and hold the government accountable.
We are also concerned that the State media has been complicit in the ongoing clampdown against civic society activists through biased reportage.
On May 20, 2019, four civic society activists; George Makoni, Frank Mpahlo, Tatenda Mombeyarara and Gamuchirai Mukura were arrested at the Robert Mugabe International Airport upon their arrival from a peacebuilding workshop in Maldives.
They are currently facing trumped-up charges of subversion.
Another girls and women’s’ rights activist, Farirai Gumbonzvanda was arrested on May 21, 2019, at the Robert Gabriel Mugabe International Airport as well and is facing charges of subversion.
On May 27, two other womens’ rights activists, Stabile Dewa and Dr. Rita Nyampinga were arrested at the Robert Mugabe International Airport as well.
Since the November military coup which saw President Emmerson Mnangagwa’s ascendancy to power, there has been continued militarization of key state institutions in Zimbabwe as well as systemic closure of the democratic space through persecution of civic society activists.
This continues to adversely affect efforts at economic development, broadening of democratic space as well as re-engagement with the international community. What has further worsened the situation is the legitimacy crisis on the part of President Mnangagwa following the much disputed 2018 polls as well as the August 1, 2018 and January 2019 shootings.
CiZC is disturbed that while the government has apparently failed to revive the economy and uphold tenets of democracy, ‘the new dispensation’ has declared war against concerned Zimbabweans fighting for a democratic and economically developed Zimbabwe.
This is reminiscent of the Mugabe era and bears testimony to the fact that Zimbabwe remains stuck in the dark past.
The clampdown on civic society activists, coupled with the continued economic meltdown is a call to action.
Going Forward
As an umbrella body of civic society organizations in Zimbabwe, we urge the Government of Zimbabwe to refocus its energies on an inclusive national reforms program that seeks to broaden and strengthen democratic space and development. The persecution of CSOs leaders only dampens efforts at achieving a shared national consensus to reform. We reiterate our call for an inclusive process on the national dialogue that brings all stakeholders together.
We further clarify that in our view the national dialogue that we continue to call for is not predicated on creating another version of a Global Political Agreement or an elite power-sharing deal. We reiterate that our envisaged national dialogue should be a reform process that seeks to safeguard the interest of citizens by restoring the Social Contract between the citizens and those that govern.
In this regard, we hold the firm view that the national dialogue process must never be restricted to political parties but should rather bring on board a cross-section of stakeholders that include civic society, labour, religious groups, business among other critical stakeholders.
Restricting the dialogue process to political parties will only create a political pact that excludes the concerns of ordinary citizens. We strongly denounce cosmetic approaches to the national dialogue process.
We implore President Mnangagwa that given the fact that he is an interested party and conflicted, the national dialogue process must be facilitated by an impartial body. We also raise our concerns over a national dialogue process that is facilitated by the National Peace and Reconciliation Commission on the basis of the following:

We further call on the president to prove his sincerity by ensuring that Zimbabwe has a conducive environment for holding an inclusive dialogue process in the wake of state-sponsored terror that has increased fear levels amongst citizens. To create a conducive environment and as part of confidence and trust building in the national dialogue, the government must immediately meet the following conditions:

We reiterate that efforts at arresting the multi-faceted crisis facing the country are hinged on a proper national dialogue process that seeks to put the concerns of ordinary citizens on board.

Addressing the Zimbabwean crisis implies addressing the concerns of the ordinary citizens who have had to bear the brutal effects of an economic meltdown stemming from a constitutional and legitimacy crisis.

Government needs to honour its social protection obligations and this is achievable through wide consultations hence the need for an inclusive process.

On our part as Crisis in Zimbabwe Coalition, we have set our minimum demands for the national dialogue process based on wider consultations with our membership around the country.

Our demands are highlighted below;

1)   It is our conviction that the national dialogue process must involve all stakeholders and a national visioning process that has civil society, government, political parties, business, religious groups and labour unions among other critical stakeholders. The dialogue process should produce a clearly timed roadmap to the demilitarisation of civilian political processes and the restoration of normalcy by focusing on key political, economic and social reforms. In this regard, we call for FULL CONSULTATION of all stakeholders rather than cosmetic processes.

2)   It is imperative to arrest the economic downturn in Zimbabwe based on a clear reform roadmap and implementation of pro-poor and inclusive economic policies. Efforts at economic transformation, stabilisation and growth should be aimed at achieving inclusive sustainable economic growth and development.

On Constitutionalism, Rule of Law, Human Rights and Human Security:

3)  The Government of Zimbabwe must uphold and guarantee citizens’ rights as enshrined in the Zimbabwean Constitution and other regional and international human rights treaties and statutes. Full implementation of the country’s constitution is equally important in promoting democracy in Zimbabwe.

4)  The Government of Zimbabwe must respect the fundamental right of access to information, freedom of expression as well as freedom of association.

5)  There is need to immediately operationalise a comprehensive programme on national healing, reconciliation and nation-building that will depolarise society and entrench the respect for diversity, inclusion and tolerance in all facets of life.

6)  The army must desist from partisan politics and confine themselves to the barracks. There is an imperative need to de-militarise the Zimbabwean state.

7)  There is need for non-interference into the work of institutions that support democracy. This again calls for full implementation and respect of the country’s constitution. Also, government must not be seen to be criminalising the work of civic society organisations.

8)  CiZC holds the firm view that implementation of electoral reforms is critical as a way of doing away with disputed elections that often result in a legitimacy crisis which comes with negative impacts on democracy and economic development.