The total water produced per day is not enough to meet the 60+ million litres that is required per day. With a deficit of 15 million litres per day, we cannot fill our reservoirs. High lying areas which include Mkoba 14, 19, 11, 10, 1, 2, 7, 15, Haben Park and Ridgemont suffer because of this deficit.

Due to frequent power outages and pipe bursts on our pumping mains, there are also times when there is no production from our treatment plants. This further worsens water supply situation.

To be able to pump treated water at full capacity, there are rehabilitation works that need to be undertaken at our treatment plant and raw water pump station (Amaphongokwe and Gwenhoro) which mainly comprise of obsolete pump replacements and repair of mainlines and major fittings which have been costed to the tune of 10 million USD.

There are however, additional works that need to be done in the short and medium term which include:

The residents are further advised that Gwenhoro dam is currently at 26% which translates to only 5 months supply at current production rate.

Amaphongokwe dam is at 75% full, which is enough to take us for an additional 12 months. However, our pumping equipment is broken down and we cannot utilise the resource. Efforts are underway to urgently construct and equip Amaphongokwe raw water pump station. However, due to the financial challenges the City is facing, the equipping of Amaphongokwe may not materialise as soon as possible.

In this case we will be forced in the next few months to exercise strict water rationing so as to extend the period by which we extract water at Gwenhoro.

Gweru City: “A Sustainable Prosperous City Of Choice by 2030” 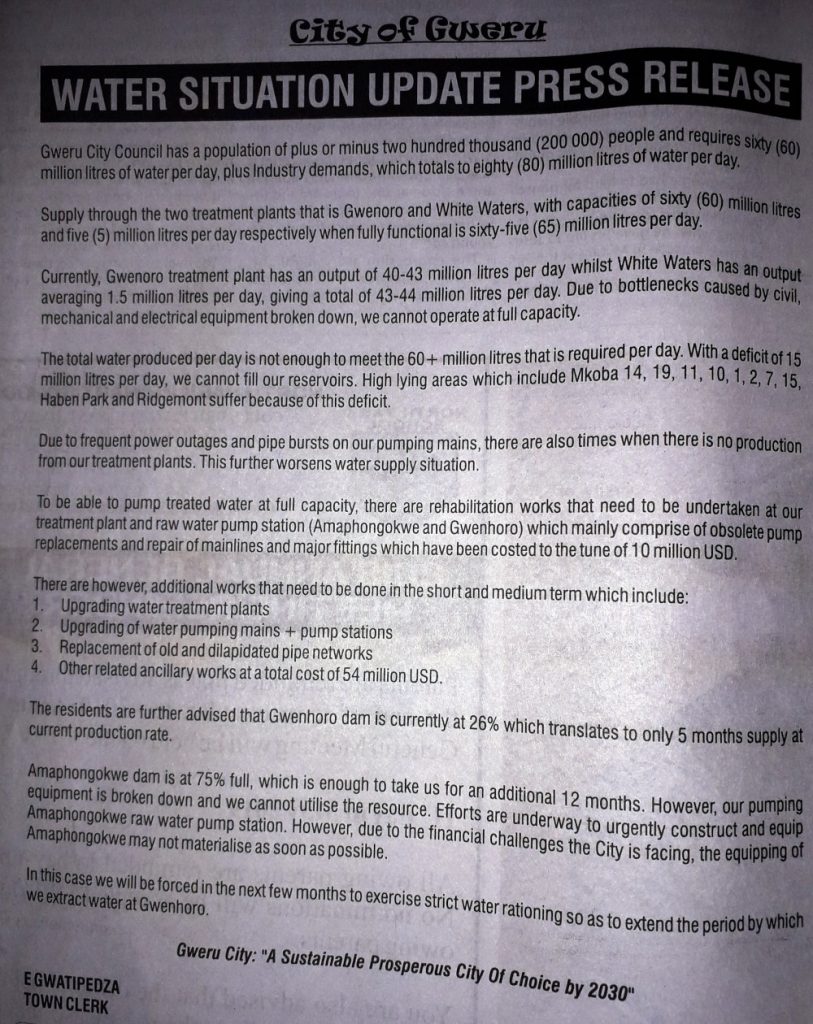 Gwenhoro Dam is a dam constructed on the Runde river and located in Shurugwi, 37 km south of Gweru. It is built on Ian Smith's Gwenhoro farm. The Dam supplies water to Gweru and Shurugwi. In November of 2018 government allocated Gweru City Council $4... Read More About Gwenhoro Dam