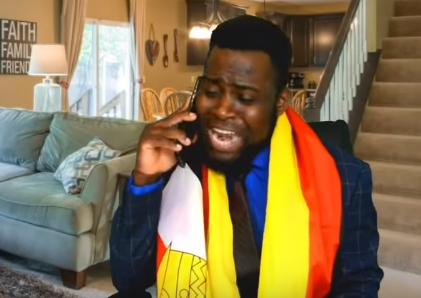 Pindula Profiles interview Taffy Theman. He is most known for his comedy videos that usually have a politics angle. Recently he created a comedy skit titled “The phone call that changed everything.” It’s a version of Winky D and Gemma’s Mugarden (video at the end of this article).

Q. What’s your real name and some background about yourself?

Taffy: My real name is Tafadzwa Ngubozabo. I was born in Gokwe (Kumusha) where I grew up and I did my primary education before moving to Norton in 2003 where I did my secondary and tertiary education.

Q: When did you start the comedy? What inspired you and how you started.

Taffy: Started doing comedy last year in August, so I am pretty much a “newbie”. I still don’t feel comfortable calling myself a comedian. At least not yet I am an entertainer.

You see I do more than make people laugh; I encourage, I inspire, I motivate, I educate and above all, I challenge the status quo.

First ever skit I created was a CHIGUMBA CHALLENGE during last years’ harmonised elections, I posted it on a Facebook group called Mvenge Mvenge as a joke, not really intending to get followers from it. I just did it because many people were doing it. It was just me having fun really…you know the typical Zimbo way of dealing with stress.

BUT the response was massive, beyond what I expected, not even in my wildest dreams. I then followed that up with the famous “kujamba weti uchinowira padhodhi” skit. That’s when I realised comedy was always in me and I just didn’t know it. And by the way that skit is my all time favorite of all my creation. It’s the Genesis of my story. From then onwards, the rest is history.

I have grown a great and steady following in less than a year 20 000 followers so far on my Facebook page (Zimba.com). I am also still building an audience on my YouTube channel (Taffy Theman) and Instagram (themantaffy).

Feels great to be counted among people who’ve been doing it for many years. I do not take pride in any of it, It’s the Lord’s doing.

Q: Can you tell us about the music angle to things? Do you have a background in music?

Taffy: I used to have an ambition to be a professional musician before I left Zim. I recorded a single at the then Heshi Mfeshi studios (Leonard Mapfumo’s studio) which I took to radio. Upon arriving at ZBC radio, the d.j asked me to give him $50 failure of which my music wouldn’t get airplay. I was so broke, I only had $5 in my pocket, which I then gave to the d.j and asked him to at the very least play my song once. He promised to play it the following day, but he didn’t, tried calling him to no avail, he blocked my number. I got so heartbroken and decided to quit music permanently. My ambition to be a musician ceased that day

So yes in that regard I do have a little background in music. I like using music in my comedy because it’s such a universally strong tool, knows no barriers.

Q: Do you also have a background in acting or all this is just ability you stumbled upon after the success of your initial videos?

Taffy: I dont have a background in acting,it just comes naturally. I suppose my creativity enables me to portray any idea in any way I do everything by myself, from scriptwriting, camera work, video editing, making beats, recording vocals, mixing and mastering.

I had to teach myself everything and I am still learning on the job as it were, its literally a one-man band.

Taffy: I have bigger plans in comedy and entertainment,  as for whether I will do it full time, hmmm I don’t see it coming, at least not anytime soon but you never know with these things. We can just but plan, God is the enabler.

Taffy Theman is a UK based entertianment, musician and creator of a news roundup show on YouTube delivered in the Shona vernacular. Read More About Taffy Theman

Leonard Mapfumo is a popular Zimbabwean Urban Grooves and is considered as one of the pioneers of the genre. He rose to fame in 2002 with his hit Seiko which featured Roki. Read More About Leonard Mapfumo