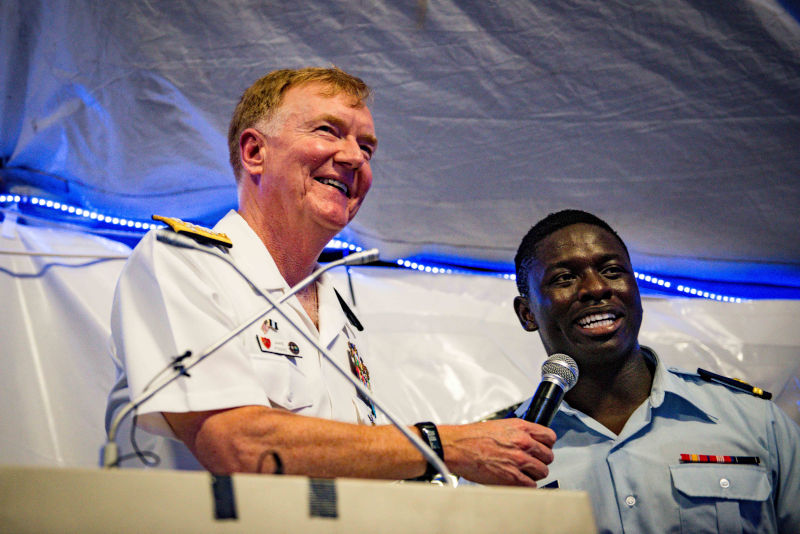 A ship sails near the coast of Africa. The ship, a 270-foot long U.S. Coast Guard cutter, is not a normal sight in this area of the world. Homeported in the small town of Key West, Florida, the ship is a long way from home – 13,008 km, to be exact – and it’s there for a reason. For the majority of the crew of USCGC Thetis (WMEC 910), the deployment, while not a normal one, is still a deployment. But for the ship’s first lieutenant, it marked a return home that was 18 years in the making.

Ensign Panashe Isaiah Mutombo, the first lieutenant aboard Thetis, moved to the United States from Harare, Zimbabwe, when he was a child.

“I moved to the United States in November 2001, when I was 6 years old,” said Mutombo. “I lived in New York City for a few months before moving to Philadelphia. I lived there for seven years before moving to Bel Air, Maryland, where my family lives now.”

“My father had foresight,” said Mutombo. “He was a Mechanical Engineer in Zimbabwe and could see the country’s deteriorating politics and general condition. I have a few family members who moved to the United Kingdom, but after a brief visit to America in 2000, my father was convinced that the only way to secure the future for his family was to move to America, leaving most of his family and his high-paying job behind.”

“I originally wanted to attend a university and join the Peace Corps,” said Mutombo. “Then a family friend introduced my family and me to the U.S. Coast Guard and its service academy. I was immediately interested. The Academy is an elite institution, and the Coast Guard as a whole is centered on humanitarian work; that’s what drew me in. It was the best of both worlds, and everything I never realized I wanted.”

“This deployment to Africa is a culminating point for me,” said Mutombo. “I was in Zimbabwe last year to visit my relatives. Before that, I visited my birth country five years before I decided to attend the Coast Guard Academy. The significance of this trip does not lie in the fact that I’ve only been back twice; the significance is how I’ve returned.”

“I originally left Africa as a child, following the vision and the dreams of my father,” said Mutombo. “Eighteen years later, my love of America and serving my country has placed me on a ship selected as the first cutter to return to Africa in eight years. I think there is something special there. I am a man of God, and this isn’t luck; this was meant to be.”

As the first lieutenant, he is responsible for maintaining the material condition of the ship, directing anchoring evolutions, and launching the cutter’s small boats for special evolutions. Mutombo led his Coast Guardsmen during the ship’s participation in one of the premier naval exercises in the region, exercise Obangame Express 2019, which took place in March.

“Participating in Obangame Express has been a challenging and eye opening experience,” said Mutombo. “Working with various African nations revealed the amount of similarities as well as differences in the methods each nation has towards law enforcement and disaster response. It was encouraging to see how it is not just an American pursuit for maritime stability and security; it’s an international focal point to deter much of the issues that plague so many countries.”

Mutombo had the opportunity to meet and speak with Adm. James G. Foggo III, commander of U.S. Naval Forces Europe-Africa, during the ship’s visit to Lagos, Nigeria, for the closing ceremony of Obangame Express. The significance of Mutombo’s return to his home country was not lost on Foggo.

“I was really taken by Panashe’s story on a personal level,” said Foggo. “Ensign Mutombo and I have something in common: like him, I’m not a native-born American, I’m a naturalized citizen. I went to the U.S. Naval Academy, and he went to the U.S. Coast Guard Academy. We are both living the American dream. He graduated just last year, and now he’s driving the U.S. Coast Guard Cutter Thetis all around the Gulf of Guinea.”

Serving in the U.S. Coast Guard is something Mutombo is proud to do. He chooses to embody the spirit of a patriot as someone who worked hard for themselves and their country, and as someone who had the opportunities to succeed and took them.

“Every day, I recognize how blessed I am, how fortunate I was to immigrate to this country and have access to so many wonderful opportunities,” said Mutombo. “Every day I put on my uniform, I feel as if I am a part of something special: a cause that is honorable and a mission that I can proudly speak about well after I serve my time.”

Not only is he proud of what he is doing and all has accomplished, but so is his family. They have supported him every step of the way.

“My family is proud of me and they tell me that every day,” said Mutombo. “They have always known me as an individual who gives himself 100 percent for something he believes in, something that is directed toward helping humanity, and that’s what I’ve done.”

Mutombo’s story is a living example of the American ideal. The U.S. is truly a mixing pot for people of different cultures, lifestyles, and experiences to come together and work toward a mutual goal.

“Because of the mentorship and teaching of a former professor and mentor at the Coast Guard Academy, I have developed a passion in African politics, especially in maritime economic ventures and security,” said Mutombo. “Thetis is on an important international mission that will benefit the economic prosperity for the western African Coastline and Africa as a whole. Secure ports will foster more fruitful business partnerships and economic opportunities. There are many factors, but one day, if all is successful, there can be a reduction in corruption, and there will be a safe, prosperous Africa.”

U.S. 6th Fleet, headquartered in Naples, Italy, conducts the full spectrum of joint and naval operations, often in concert with allied and interagency partners in order to advance U.S. national interests, security, and stability in Europe and Africa.