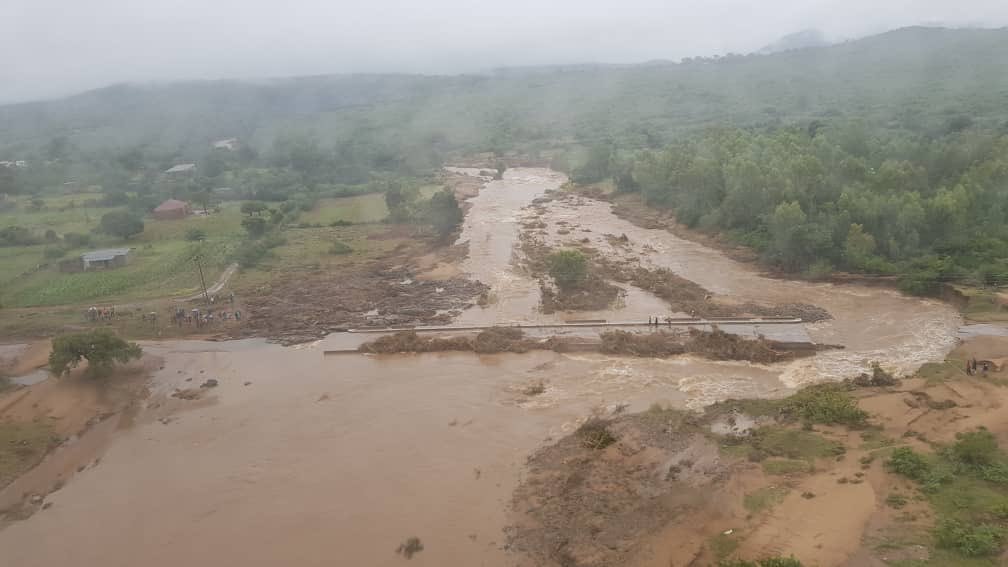 An entire settlement was washed away by flash floods induced by Cyclone Idai in Chimanimani.

Floodwaters swept away 80 houses at Dzingire Growth Point, popularly known as Kopa when three rivers, Rusitu, Nyahode and Chipita flooded, confluence and changed course, washing away all the houses and a police station situated between the rivers.

A woman who stayed at Kopa, Majiva Magweva (32), lost her two children to the floods as well as her mother and niece.

In an interview with Newsday, Magweva narrated the heart-rending events of the fateful night:

It was around 9 pm on Friday when water started entering our house. I took my two-year-old child and went outside to look for a secure place.

I walked a few steps and was knocked down. I tried hard to keep a tight grip on my child but was hit by a rock on the chest and forced to let off the child.

I was thrown onto the river bank and I realised I was marooned and more water was coming.

That time, I saw another woman. We rushed and helped each other up a tree, pushing and pulling each other.

One more woman came and in no time, we were up three branches. We were all naked; we had been stripped naked by the floods.

Around 3 pm on Saturday, rescue came, but in a very difficult way. A group of men with three ropes, which did not reach us.

One of them volunteered to have a rope tied around his waist and dived into the water while the other men held the rope to ensure that he does not drown.

He arrived at the tree and went up, tied the rope on the branch to allow us to hold on it before they dragged him out using the same rope.

When we (she was with two other women) were up to the tree, we prayed the whole night for rescue. We wanted to join others, we didn’t know they had all been washed away. My two kids, my sister’s child and my mother are gone. I don’t know where they are.