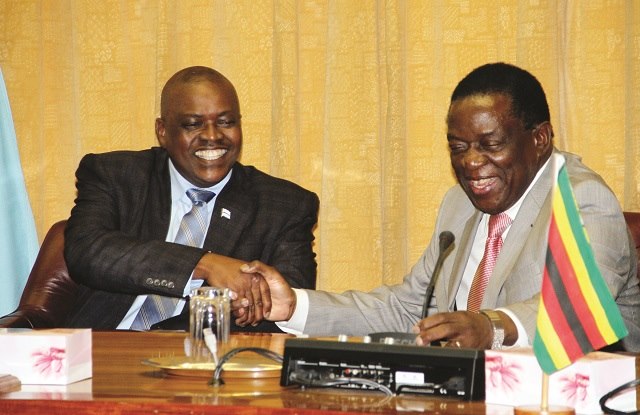 President of Botswana, Mokgweetsi Eric Masisi will arrive in Zimbabwe this week for the inaugural Zimbabwe-Botswana Bi-National Commission (BNC).

Masisi will then meet President Emmerson Mnangagwa on Thursday.

A statement released on Saturday by the Ministry of Foreign Affairs and International Trade reads as follows:

The Inaugural Session of the Zimbabwe and Botswana Bi-National Commission (BNC) will be held on 28 February 2019 at Meikles Hotel in Harare and will be headed by the two countries’ Heads of State and Government, His Excellency, President E D Mnangagwa, and his Botswana counterpart, H.E. President Dr Mokgweetsi Eric Keabetswe Masisi.

The BNC replaced the Joint Permanent Commission on Co-operation between the two countries, which last sat at the 12thSession in Gaborone, Botswana, from 8 to 11 February 2018.

The BNC is the highest bilateral framework of co-operation between Zimbabwe and Botswana. It will be preceded by a Ministerial Meeting on 27 February 2019, and a Senior Officials meeting on 25 and 26 February 2019.

Eight Memoranda of Understanding and Agreements covering political and diplomatic, economic, social, and defence and security sectors will be signed during this Session.

One Comment on “Botswana President Masisi Set For Harare”