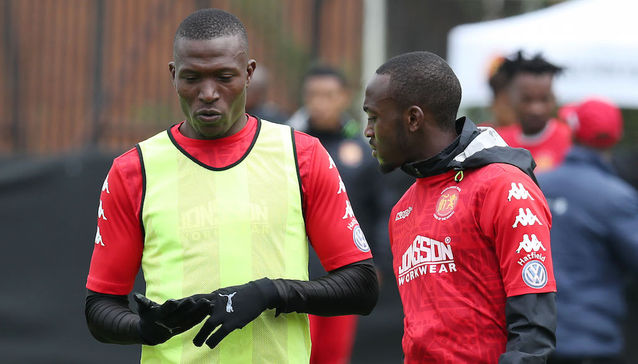 Peter Shalulile with Tendai Ndoro of Highlands Park during the 2019 Nedbank Cup Highlands Park Training Session at the Balfour Park, Johannesburg on the 12 February 2019 ©Muzi Ntombela/BackpagePix

South African-based Zimbabwe striker Tendai Ndoro said that something is wrong with South Africa football since too few goals are scored.

In an interview with KickOf.com, Ndoro, who plays for Highlands Park in the ABSA Premiership, said that strikers need to be more composed for the goal tally to rise. He said:

It has been preached since I came to South Africa, with strikers scoring 10, 11, 12. I don’t know what’s wrong or if it’s the type of football, but we need to have more composure and take full responsibility as strikers for not getting enough [goals].

We have chances, sometimes you score one and sometimes you have 10 chances and you don’t score. It’s football, but one day there will be a season of goals. Now there’s not a lot of games left and it’s eight goals, which is not good enough.

Ndoro formally played for Soweto giants Orlando Pirates before his move to the ‘Lions of the North’. He has so far scored one goal in nine appearances.