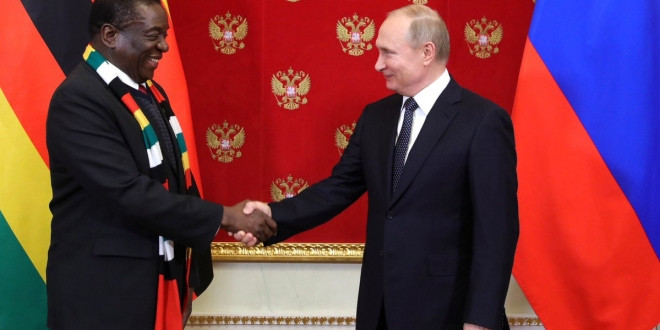 President Emmerson Mnangagwa received no kind of loan or financial rescue package from Russia when he met the country’s president, Vladimir Putin on Tuesday. Mnangagwa reportedly left with a pile of agreements on military cooperation and stemming money laundering.

After the meeting between the two Presidents, the Kremlin issued a statement which read as follows:

During the talks, the participants discussed matters pertaining to promoting bilateral relations and current international and regional issues.

Following the consultations, exchange of documents signed during the official visit of the President of Zimbabwe to Russia took place in the presence of the leaders of the two countries.

The signed documents included an agreement between the Russian Federation and the Republic of Zimbabwe on extradition and an intergovernmental agreement on mutual protection of intellectual activity results and intellectual property protection in the course of bilateral military-technical cooperation.

The signed documents also concern cooperation in the sphere of countering the legalisation (money laundering) of criminally obtained proceeds and the financing of terrorism, the project for developing the Darwendale platinum group metal deposit and the supply of fertilisers to African markets.

Mnangagwa’s trip to Russia started on Monday before the ongoing protests began. He is now in Belarus where he met the country’s President Alexander Lukashenko.