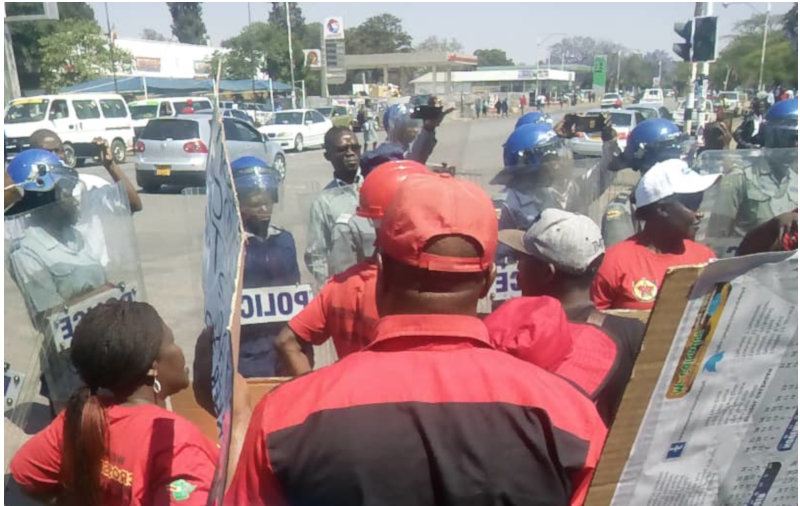 The Southern African Trade Union Coordination Council (SATUCC) has called on the government of Zimbabwe to respect workers’ rights and the rights of individuals after the police arrested leaders and members of the Zimbabwe Congress of Trade Unions who wanted to protest. The ZCTU wanted to protest against the government’s policies particularly, the two percent tax on money transfers. The body called for the unconditional release of ZCTU leaders.

We publish the statement from Satucc below,

The Southern African Trade Union Coordination Council (SATUCC) representing 22 major federations in 14 of the 16 Southern Africa Development Community (SADC) member states with a combined membership of about 6 million working men and women, strongly condemns the recent detention and disruption of peaceful demonstrations in the regional capitals of Zimbabwe that were scheduled to be held today on 11th October 2018 organized by the Zimbabwe Congress of Trade Unions (ZCTU).

We have received disturbing reports that the ZCTU President Peter Mutasa, the Secretary-General Sapient Moyo and over 35 trade union activists haw been arrested and physically assaulted in Harare and other major towns countrywide as police brutally moved in earlier today to stop the phased nationwide protest by ZCTU and it’s general membership against the announced new tax regime, in particular, the 2 percent tax on electronic transfers and the rising poverty.

We have further perturbed Cobs informed that over 40 aimed police officers have occupied the offices of the ZiCTU since morning and put all staff work inside the building under house arrest.
SATUCC takes the action by the authorities in Zimbabwe as a gross violation of fundamental workers’ rights to organize, assemble and expression in Swaziland contrary to International Labour Organization Conventions 87 on Freedom of Association and Protection of the Right to Organize which the Government of Zimbabwe has ratified and has committed to uphold and implement.

It is saddening that once again the workers of Zimbabwe have been denied the right to organize, assemble and freely express themselves barely two months after the swearing-in Preside. Emerson Mnangagwa who proclaimed a new dispensation for the people of Zimbabwe and promised transformation from the previous President Robert Mugabe brutal administration which repeatedly violated workers tights with impunity.

SATUCC strongly condoms the action by the Governor. of Zimbabwe and stresses that workers rights, as well as human rights in general, should be respected and upheld.

SATUCC, therefore, demands that the Government of Zimbabwe should respect and safeguard the rights of all workers and general public in Zimbabwe, and for our affiliate ZCTU to freely conduct trade union activities, defend and champion the rights of workers in Zimbabwe without restrictions and police brutality and harassment.
Finally, SATUCC demands the immediate unconditional release of all detained trade union leaders and activists including ZCTU President Peter Mutasa and Secretary General Japhet Moyo.