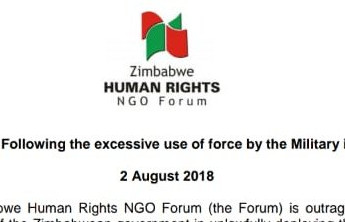 The Zimbabwe Human Rights NGO Forum (the Forum) is outraged by the behaviour of the Zimbabwean government in unlawfully deploying the military in Harare yesterday, leading to the extra-judicial killing of three unarmed civilians, according to the Zimbabwe Republic Police (ZRP) statement, and several more injured. We extend our deepest condolences to the families of the deceased. May their souls rest in peace.

The tragic events were a result of clashes between the ZRP and members of the public, including opposition political party supporters who were protesting the perceived delay in the release of the results of the Presidential Election. Reports indicated that the ZRP were in control of the situation when military vehicles were observed driving into the central business district. Gunshots were fired randomly throughout the central business district. Forum observers witnessed soldiers randomly firing live bullets and beating up bystanders who were not involved in the protest. The military’s conduct fell short of internationally accepted standards in controlling protesting crowds.

This is unacceptable, and the Forum condemns this behaviour in the strongest terms.

The Forum recalls that the current government came into power through a military coup in November 2017 and is yet to prove that it can make use of state power within the bounds of the law and that it values respect for human rights. Yesterday’s events leave ordinary citizens with serious doubts that this govemment is any different from its predecessor, if not worse.

While the Forum does not tolerate violent protests, the reaction of the State in maintaining law and order was grossly disproportionate to the violence that it sought to contain, to the extent of killing unarmed civilians.

The Forum reiterates that the right to demonstrate and to present petitions is a fundamental human right guaranteed by Section 59 of the Constitution. However, the Forum underscores that this right must be exercised peacefully, paying due regard to the rights of others.

The Forum has noted the statement by the 2RP that they invoked Section 37 (1) of the Public Order and Security Act (POSA) in requesting support from the military. The Forum also noted the statement by President Emmerson Mnangagwa placing responsibility at the hands of his political opponents. Both statements are regrettable, especially coming from people entrusted with the welfare and security of the nation. Deploying militarty aircraft and amoured vehicles to atack unarmed civilians was unjustified under the circumstances.

The Forum rernembers too well the evils perpetrated upon the people of Zimbabwe through abuse of the military in the past. The Forum further remembers the evils of Gukurahundi, when the military is reported to have murdered an estimated 20.000 civilians, and the 1998 Food Riots when the military was used to attack protestors. It recalls 2008, when the military was used as a political tool to subvert the elections. The. memories from the previous regime have been the reason why many civil society organisations have always called for security sector reform. Yesterday’s events are a sad unmasking of the military brutality which Zirnbabwe must never accept, and which must not be allowed to visit our nation ever again.

The Forum notes that this is not an isolated incident of brutality by the military. As recently as 24 July 2018, military personnel stationed at Inkomo Barracks heavily assaulted a civilian in Chinhoyi and he suffered severe head injuries. Similar attacks have been reported since 17 November 2017 military coup.

It is not acceptable that the people of Zimbabwe must be made to choose between freedom and security. The government of Zimbabwe must give a full account of what happened and ensure justice for victims and their families.

The Forum therefore for: