With less than two weeks to go before the July 30 harmonised elections, the gap between President Emmerson Mnangagwa and MDC Alliance presidential candidate, Nelson Chamisa has narrowed to just three percentage points. The latest Afrobarometer survey released on Friday,  reveals that President Emmerson Mnangagwa’s popularity has decreased as he is projected to win 40 percent of the vote. This is a decrease of 2 percentage points from the previous survey which had him getting 42 per cent of the vote. Nelson Chamisa is projected to win 37 percent, an increase of 6 percentage points from the last survey. Only 3 per cent of the respondents confirmed that they would vote for the other 21 presidential candidates combined.

The number of people who refused to reveal their preferences or are still undecided went down to 20 percent from 25 percent in the previous survey.

According to Afrobarometer, the key findings from the latest survey are as follows: 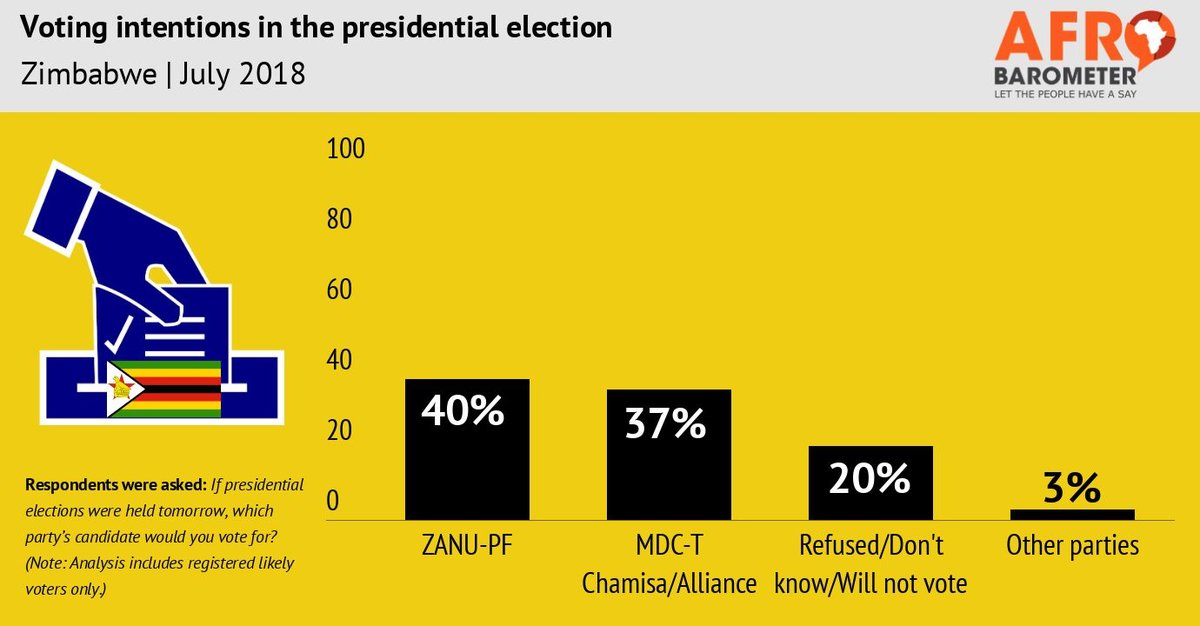 Key findings
▪ As of early July 2018, Zimbabweans were ready for elections: 86% of eligible voters (and 97% of registered voters) said they were “probably” or “definitely” going to vote.
▪ At this time, Zimbabweans saw a somewhat more open political atmosphere than for previous campaigns. Fears of free expression and electoral violence had declined slightly, though both remained high (76% and 43%, respectively).
▪ More people reported attending ruling-party election rallies than opposition-party rallies, especially in rural areas. But more people, especially in urban areas, thought that the opposition’s presidential candidate would perform better at “creating jobs for the people.”
▪ Compared to the early May survey, by early July the race for the presidency had tightened. Among citizens who were both registered to vote and likely to vote, 40% said they would vote for the ZANU-PF and 37% said they would vote for the MDC (combined party and Alliance).
▪ Depending on how undeclared voters (20%) ultimately decide to vote, either party had a chance to win the presidential election on the first round.
▪ Zimbabweans continued to worry that the election would not end well: More than four in 10 expressed concerns that incorrect election results would be announced, that the armed forces would not respect the election result, and that post-election violence would occur.
▪ Perhaps reflecting these concerns, Zimbabweans as a whole – regardless of whether they planned to vote or which candidate they preferred to vote for – still considered the ZANU-PF the more likely winner in the race for the presidency.

…By any measure, this is a considerable swing in favour of the challenger. Any further projection of this momentum into the final weeks of the campaign would reduce the gap between the contenders within the survey’s margin of error (+/-2 percentage points), rendering the election too close to call.