There was an explosion at a Zanu-PF rally in Bulawayo which was being addressed by President Emmerson Mnangagwa. The President and Vice-president, retired General Constantino Chiwenga are reported to be safe and have been secured at Bulawayo State House. However, Vice President Kembo Mohadi, Zanu-PF national political commissar retired Lieutenant -General Engelbert Rugeje, Minister of Water, Environment and Climate Oppah Muchinguri-Kashiri, Zanu-PF Women’s league chairperson Mabel Chinomona and Vice President Chiwenga’s wife, Marry are reported to have been injured.  Several of the president’s aides have been injured as well. Most of the injured senior party officials are being treated at Mater Dei Hospital.

Minister Muchinguri-Kashiri is still in a state of shock and she had some injuries around her chest…VP Chiwenga had slight bruises on his face but he is fine. Four security personnel and some chiefs were also injured so all in all we are talking of 8 or 9 people who have been injured.

The cause of the explosion is yet to be ascertained and security agents have cordoned off the VIP stage and are collecting evidence. However, a Twitter account has posted an image which shows an unknown projectile in the air seconds before the explosion. 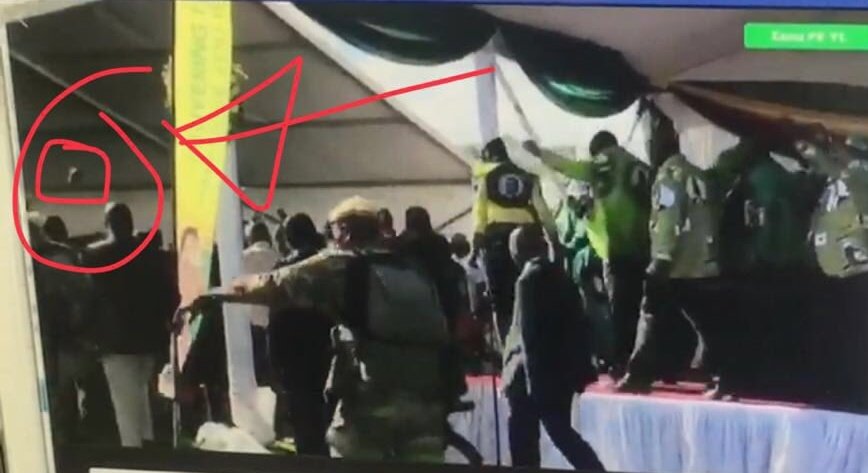 We have 25 people at Mpilo, 12 at Mater Dei and four at UBH, giving us a total of 41 who have so far approached our health institutions complaining of injuries. Some had, however, previously gone home and later discovered that they wanted to be assisted and are coming in. We will therefore have a consolidated figure (today) but so far that is the figure we have. We have no fatalities so far.

Statement From President Mnangagwa after the Explosion at his rally

6 comments on “Video: Footage of The Explosion At Mnangagwa Bulawayo Rally, 41 Injured, No Fatalities [UPDATED]”